Esther had swimming lessons this morning and I took along the panda and his last limb bits, determined to finish this project while she swam. 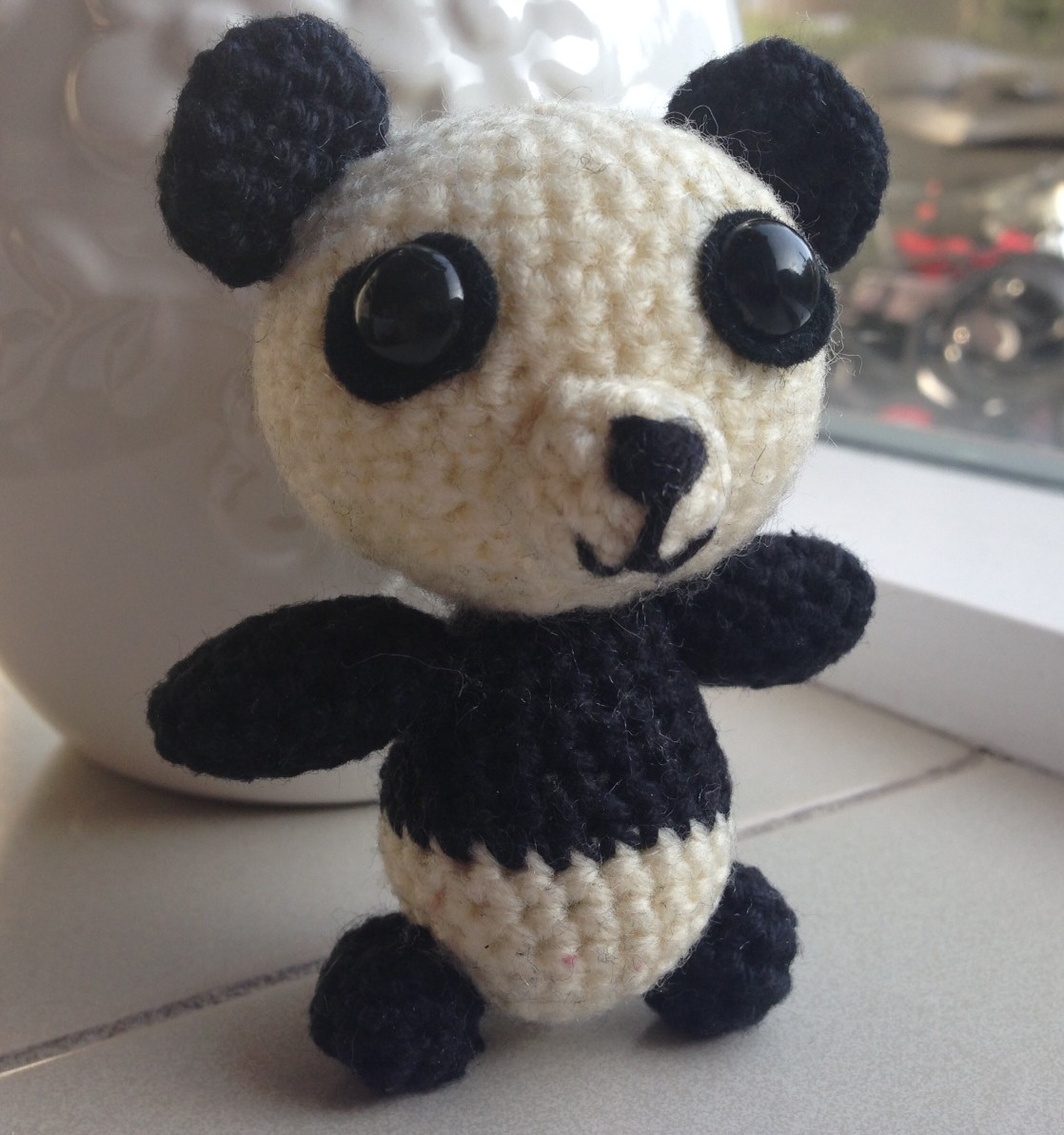 Due to yarn shortages I couldn’t exactly follow the pattern. His head is by the book, but I ran out of cream-coloured yarn and had to make the body quite a bit smaller. I improvised arms and legs to be more in scale. 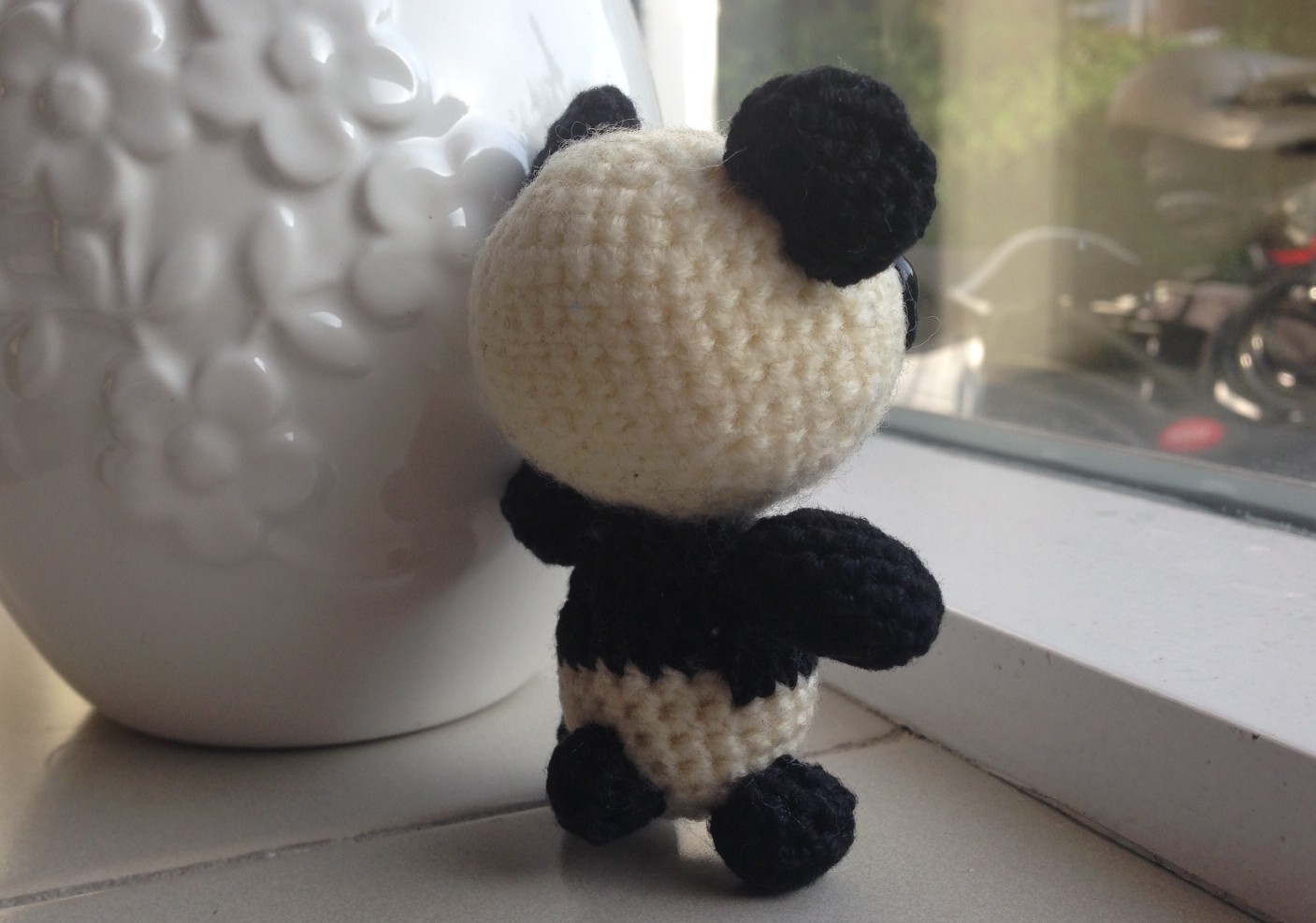 Nevertheless, I like how the panda turned out. It was way too much work and I hope to never make one again, but if you want a crocheted panda it’s the cutest free pattern out there. 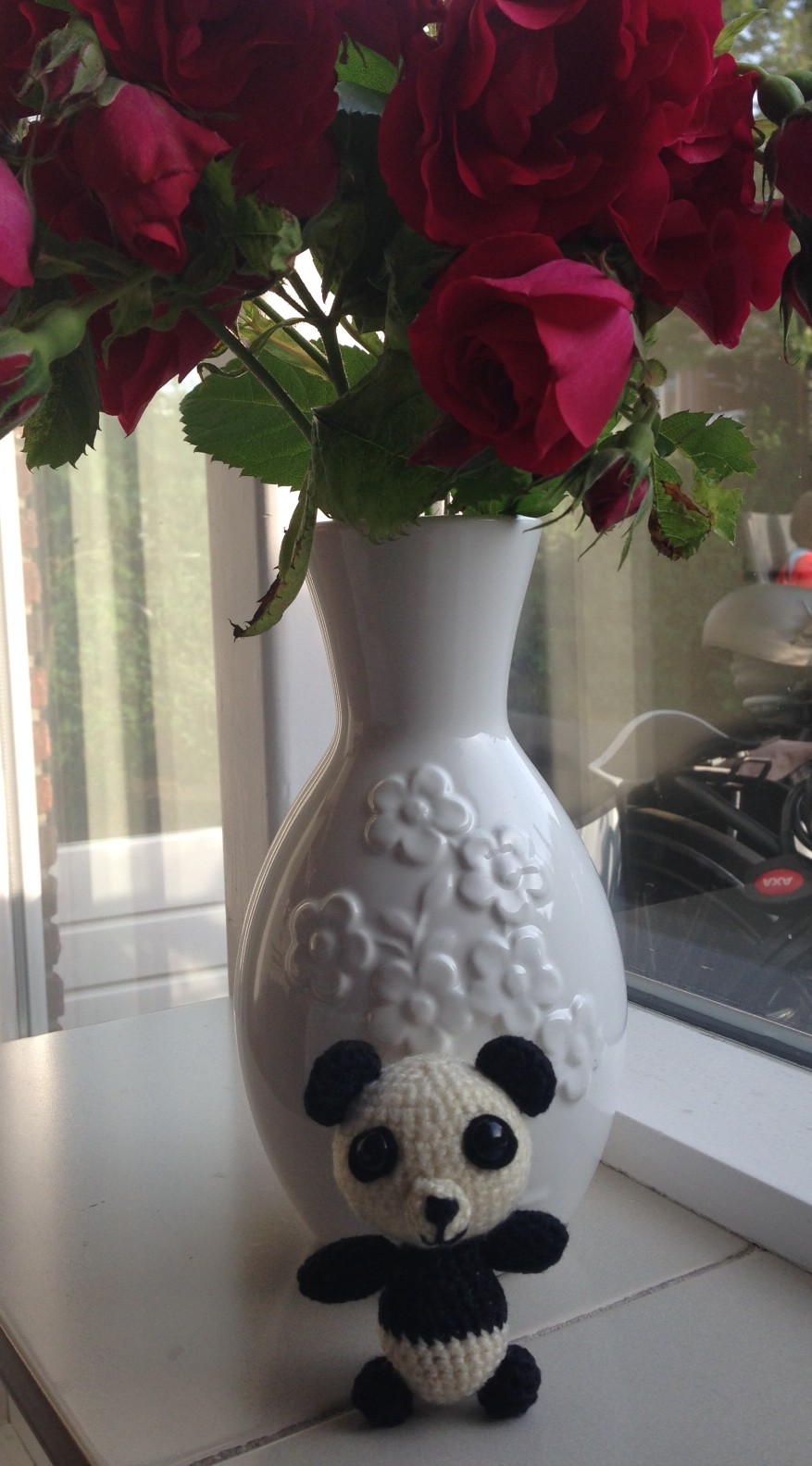 And hey, another promise fulfilled. Now I just need to finish the horse…

On Wednesday evening I made extra jewelry to save as blogging buffer. Today was going to be the day I finished the crocheted panda so I certainly wasn’t going to need it yet.

We all know where this story is going. It’s after nine in the evening and the panda is still limbless. Bye-bye, buffer.

Remember the children’s wrap bracelets I made way back when? I used up all the memory wire then except for two scraps of two loops each. They were too small to use, but I’m having such fun using the tiny impossible scraps that I decided to use them anyway. And they weren’t too small after all. I pulled out red and purple glass beads in assorted shapes and shades for these last two wrap bracelets. 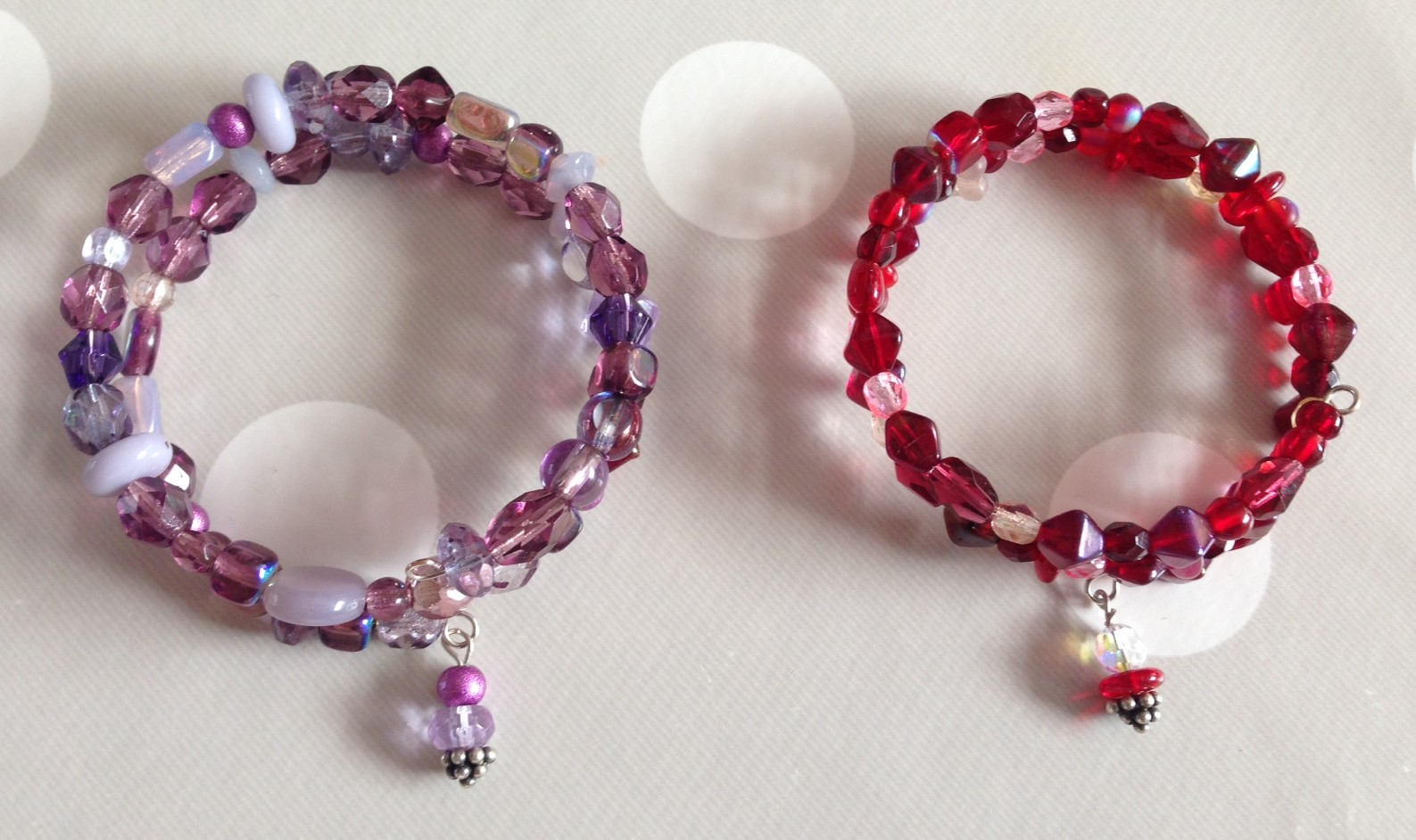 A charm made with a fancy headpin and a couple of beads finished them off in style. 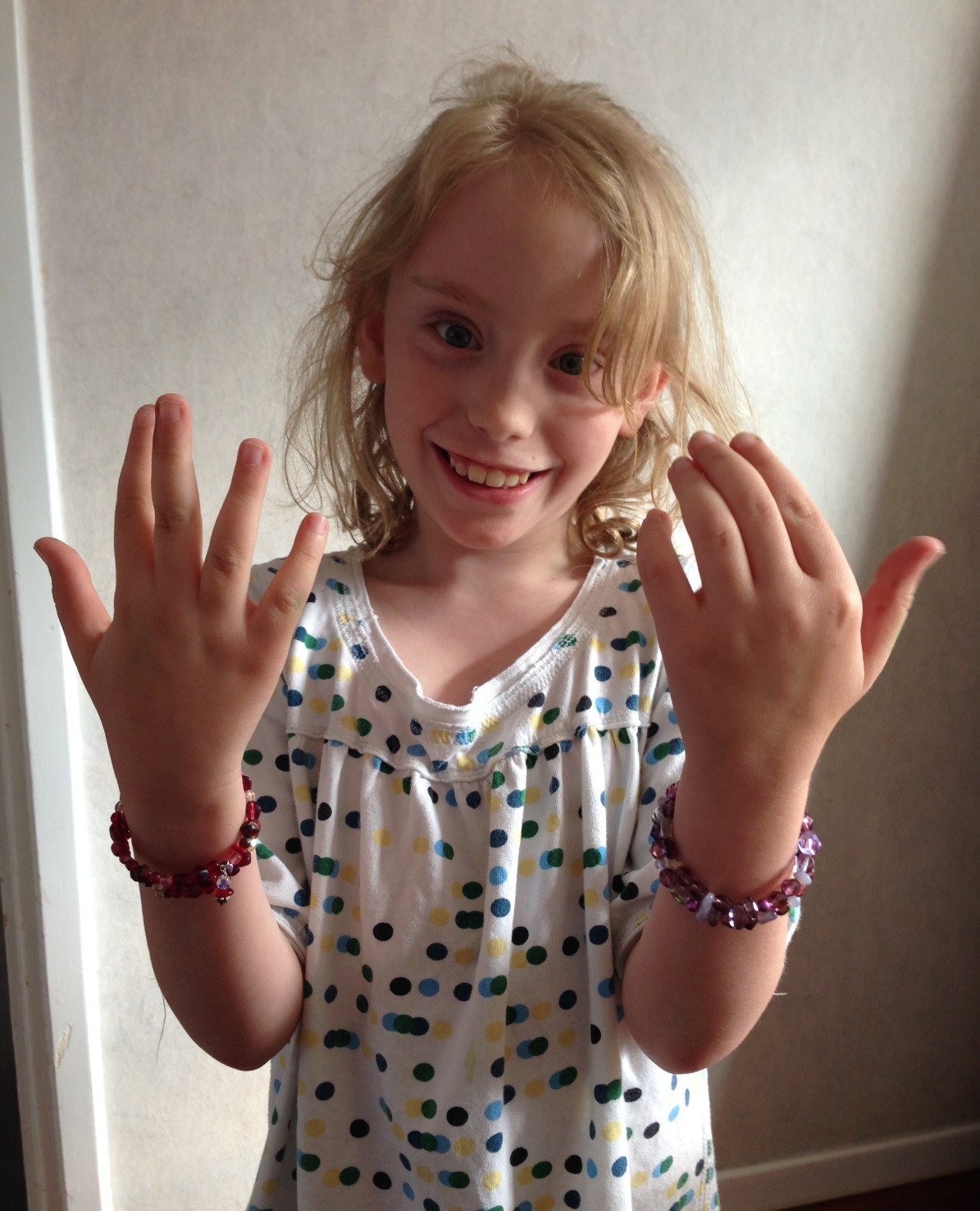 And see how pretty they look in action!

(Special thanks to Julianna, my lovely assistant.)

Last night’s beading project combined the dregs with the new. I had a scrap of wire, just long enough for a short necklace, and a few beads leftover from last week’s bracelet set. To fill it out I pulled out an unopened bag of seedbeads called “Shanghai Midnight.” It’s a beautiful mix of dark blues and golds, but that’s not why I bought them. I bought them for the name. Shanghai Midnight. It sounds like a Jackie Chan movie. 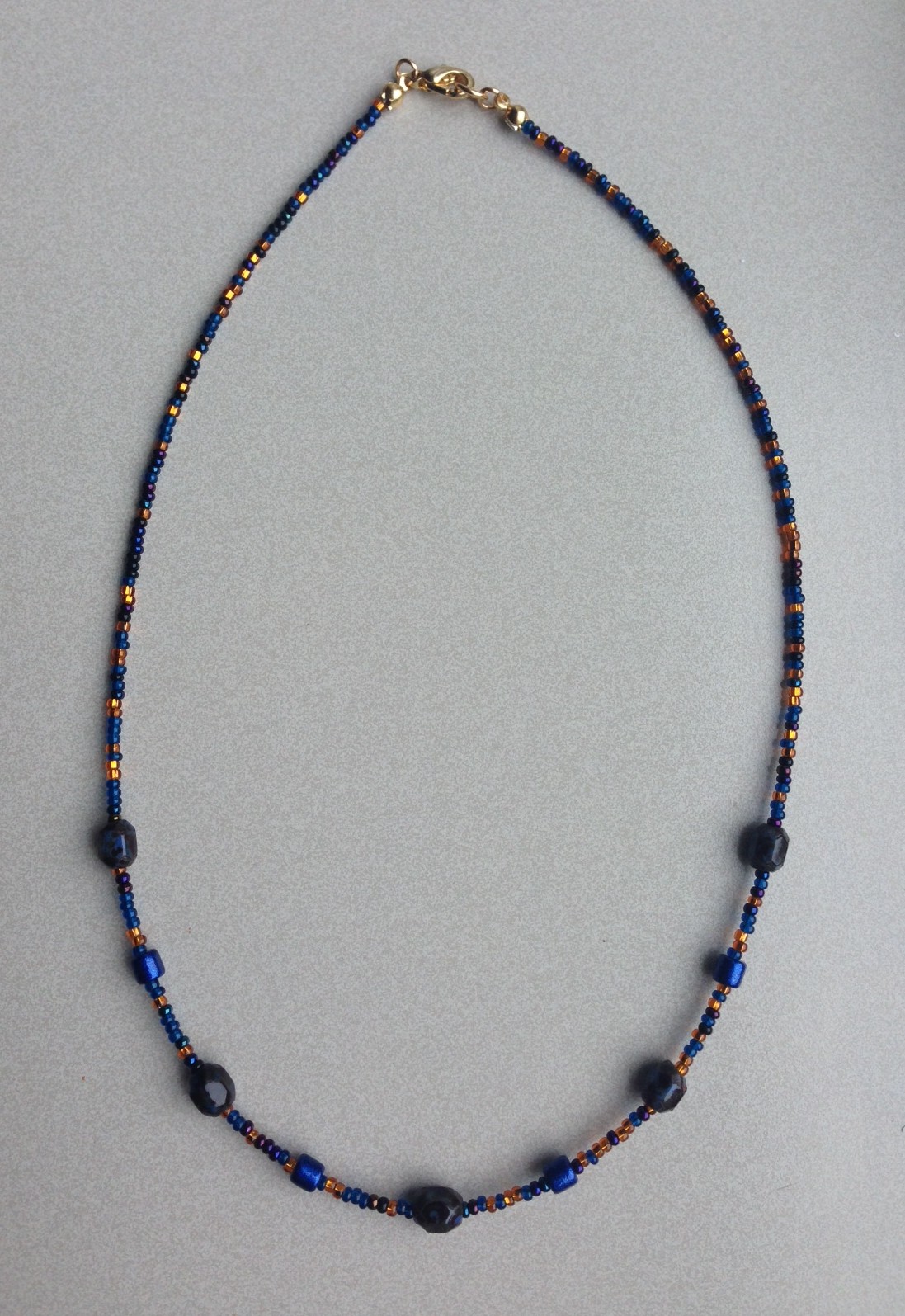 The necklace is simple but delicate and I like the look of it on.  If I didn’t have too many necklaces already I’d keep it for myself.

I’m keeping up with the Sewaholic Belcarra Sew-Along. This is the first time I’ve followed a sew-along in live time and so far it’s puttering along at turtle speed, which suits me fine.

Today I ironed an old sheet and cut out all the pieces for my blouse. It’s an old Ikea sheet, made with lycocell. What is that even? It wasn’t the sturdiest of fabrics and it’s paper thin now so it’s going to be a see-through blouse. That’s okay for a blouse that will never leave my house.

I have enough left to test another blouse pattern (next week?) and then I’ll toss the scraps. 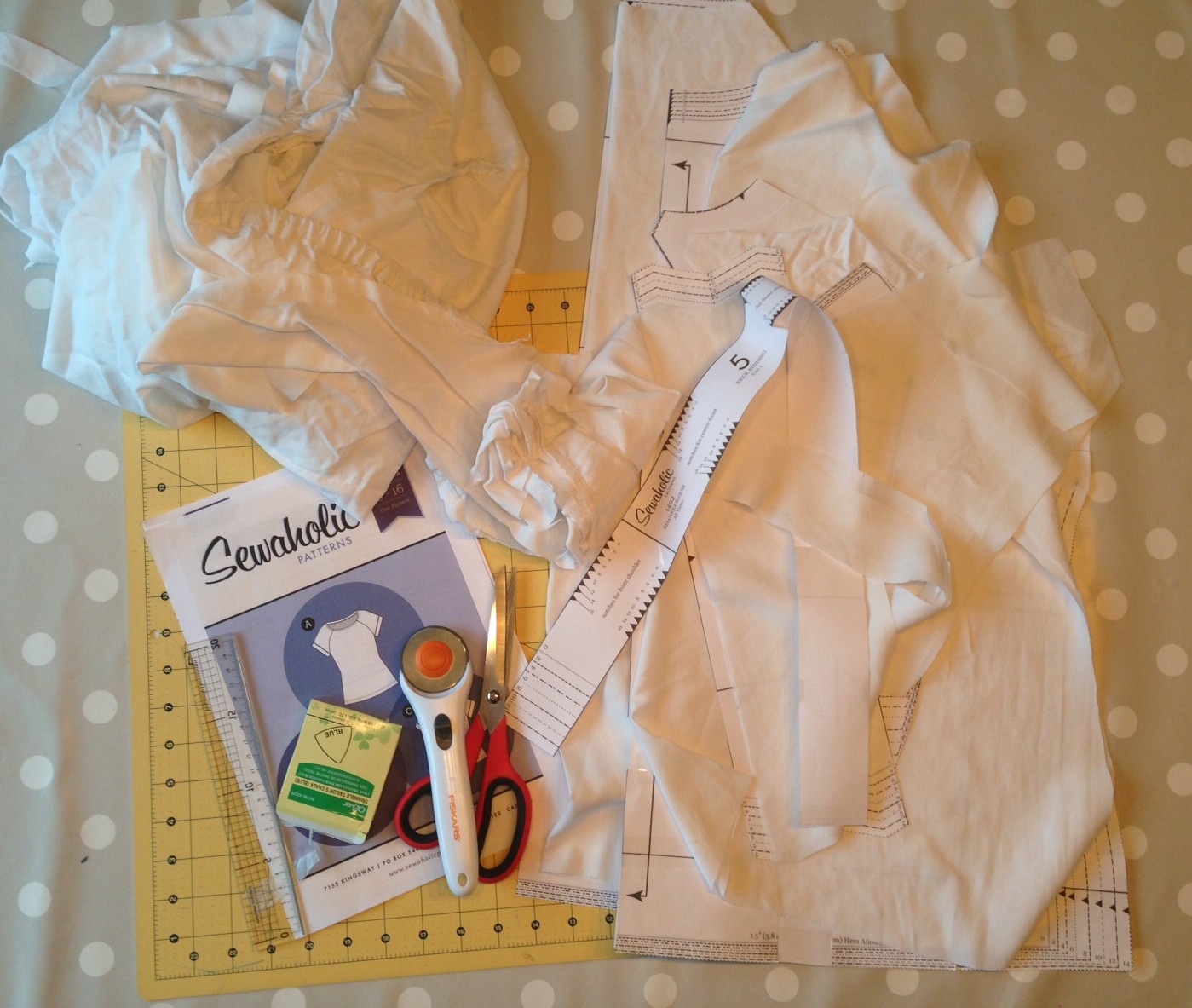 I abandoned yesterday’s panda and started a new one today, this time using the same cream-coloured wool as the owl. I was confident I had enough wool left. I was wrong. Now Partial Panda #2 has been abandoned until I figure out how to finish a panda with the supplies I have.

This afternoon I was taking care of my friend’s four-year-old daughter. Justine saw Partial Panda #2 on the coffee table and immediately asked if I could make her one. I love this child and there are many things I would do for her. Making a panda is not one of them. I told her to choose another animal. She said horse. I cringed. No, not a horse either.

My favourite crochet blog has a couple of new tiny projects: a teddy bear and a bunny. I suggested one of those. She suggested horse again. I countered with teddy bear or bunny. She said bunny. I said yes, and thankfully Sophie, her mother, arrived before I caved and agreed to another horse.

So there I was, in the middle of Promises Fulfilled Week, with another promise to fulfil. Since it wasn’t a horse or a panda I got right on it.

I used a 2.5mm hook and the apricot wool from the yarn samples. 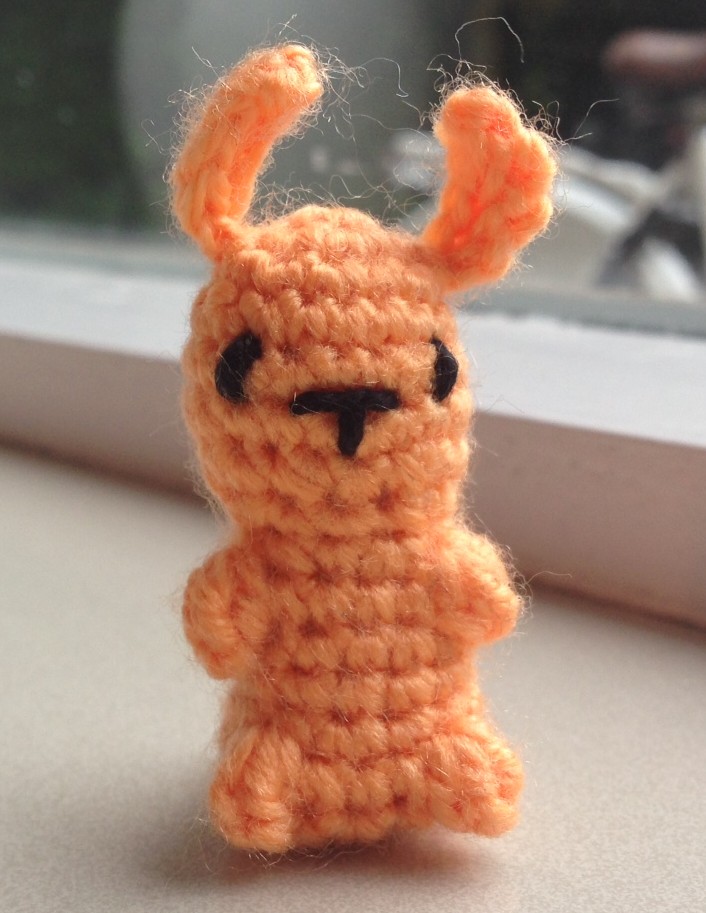 Check out the fluffy cotton tail! 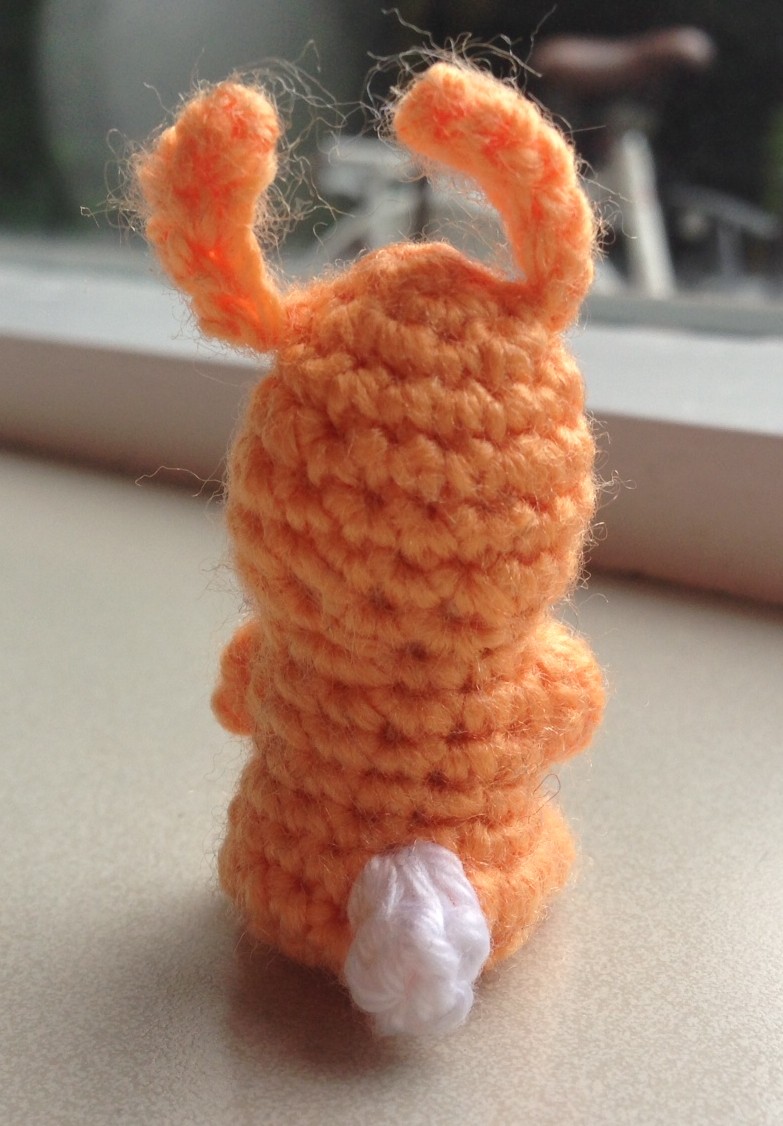 I love these little patterns. They’re all one piece — even the tail — so there’s none of the dreaded assembly. Plus they’re quick to make; I can usually finish one in about an hour. 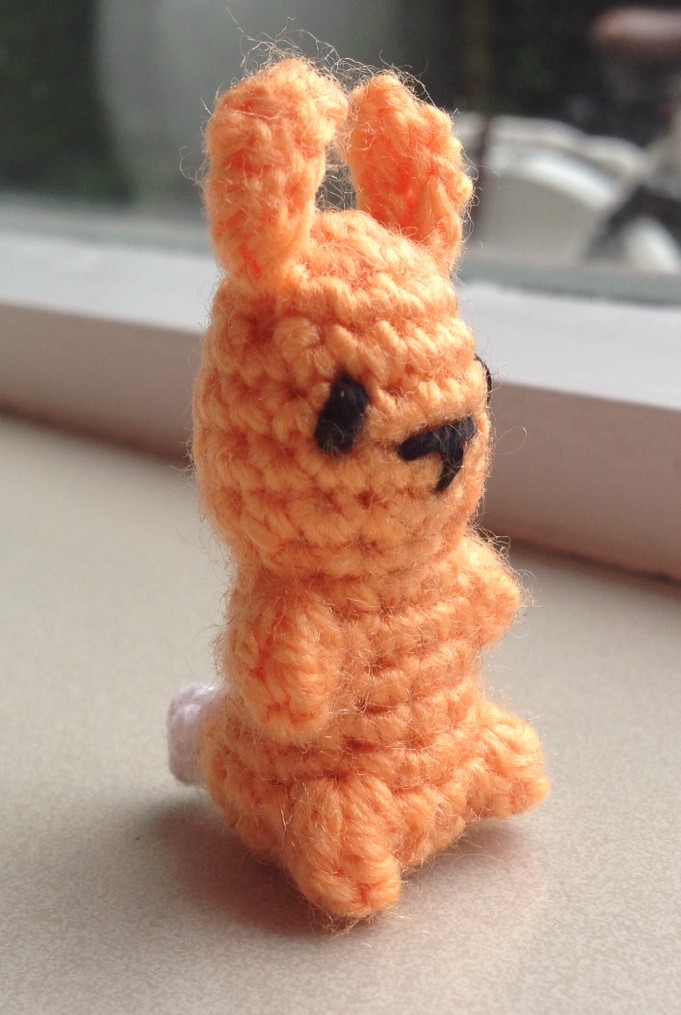 Today I learned that I should promise more bunnies. It’s a promise I can keep.

This morning I started a panda and realized about a quarter of the way in that I don’t have enough black yarn. What to do? I abandoned ship and started a new project. My living room is littered with the carcasses of unfinished animals.

I had to pick something quick so I decided on an owl Esther requested during my last crochet binge. 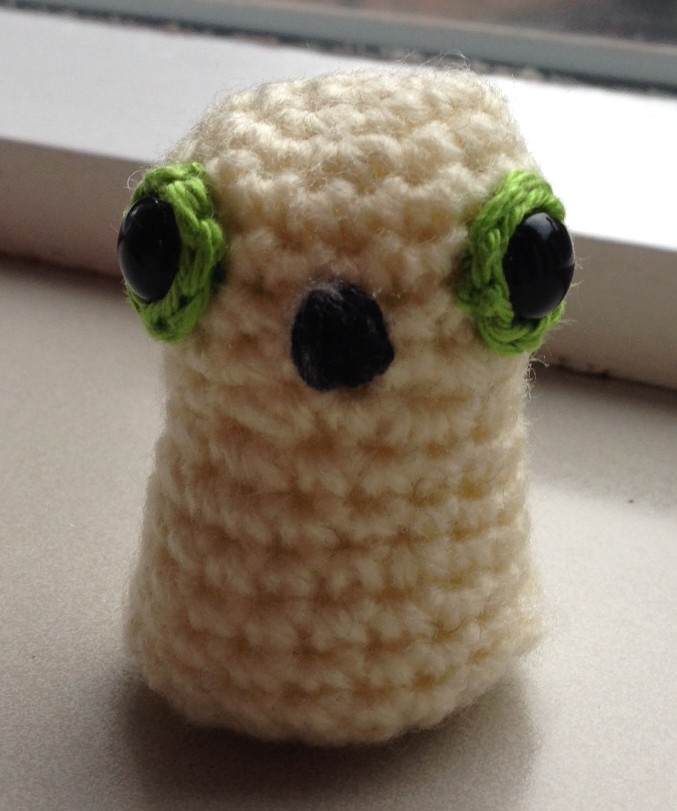 I’m not sure about this owl. I didn’t have the right eyes so I used black ones framed with some green cotton. I also tried to give him little pointy ears to make him a bit more owl-y but it didn’t really work. 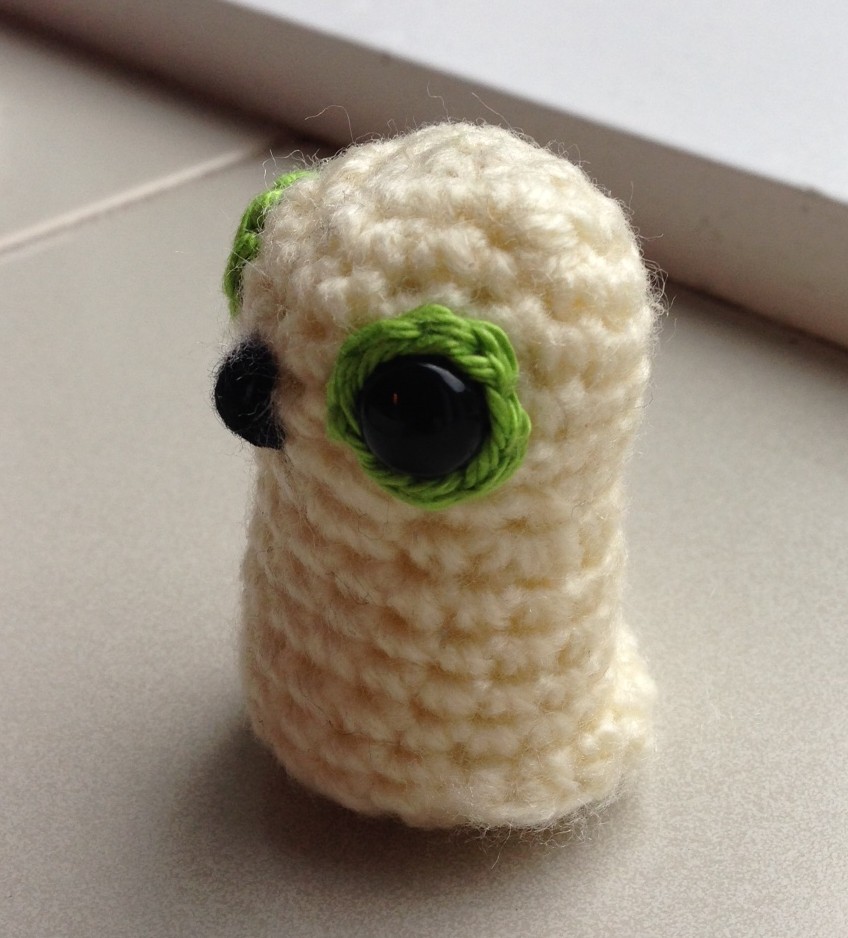 Esther liked him but wanted him to have some wings. She stitched some on and tied a scrap of blue yarn around his neck. 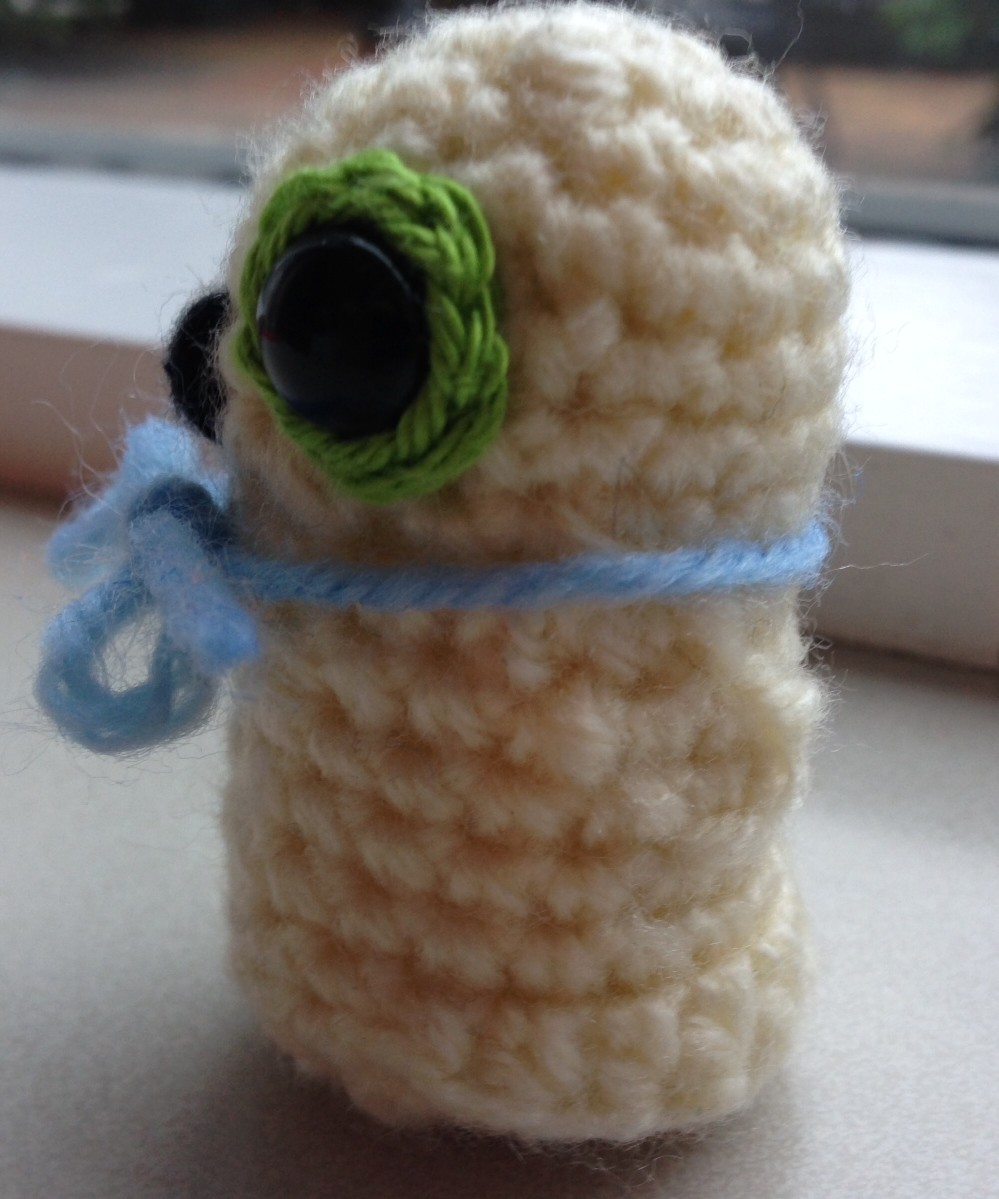 And since she is a child of the selfie generation, she took this photo with her new friend, Pigwidgeon. 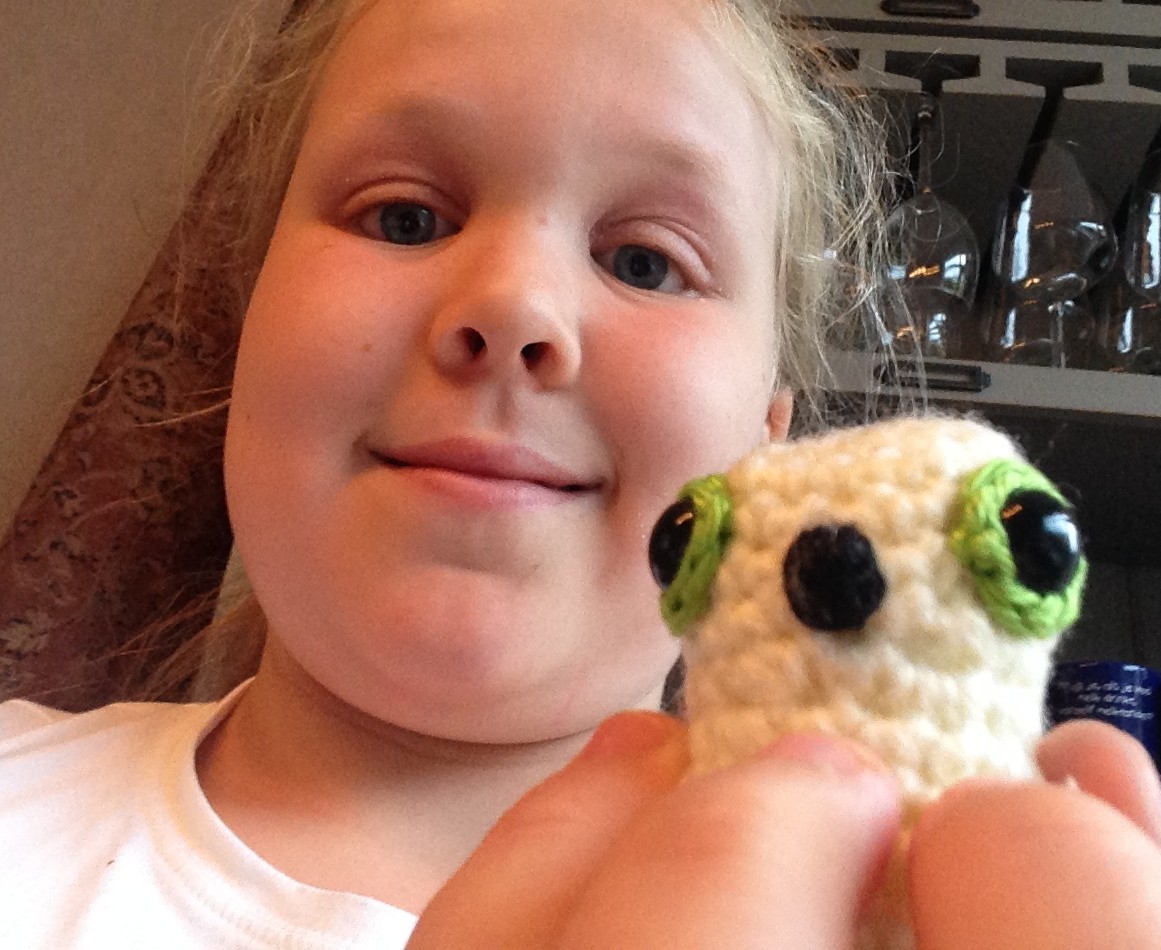 This week is Fulfilled Promises Week. The week in which I look back to all the crafty promises I made and actually fulfil them.

This means I need to make the amigurumi animals I promised Martina’s friends back in February. Let me just say, the weather is too good for crochet. I can sew the whole year round but yarn crafts belong to the months with an r. Unfortunately, I promised to have the animals done before the end of the school year.

It would have made sense to finish the horse that I started a couple of weeks ago. However, I’m not enjoying that horse and wasn’t sure I’d be able to get it all done today, which would have left me irritated and without a Thing to post about.

So I made a sheep.

I found a super cute pattern on Etsy, but at €2.64 it was out of my budget. I’m trying to keep under €200 until the end of the month and I couldn’t find any patterns for under 38 cents. Then I found this free pattern that came close to what I was looking for. 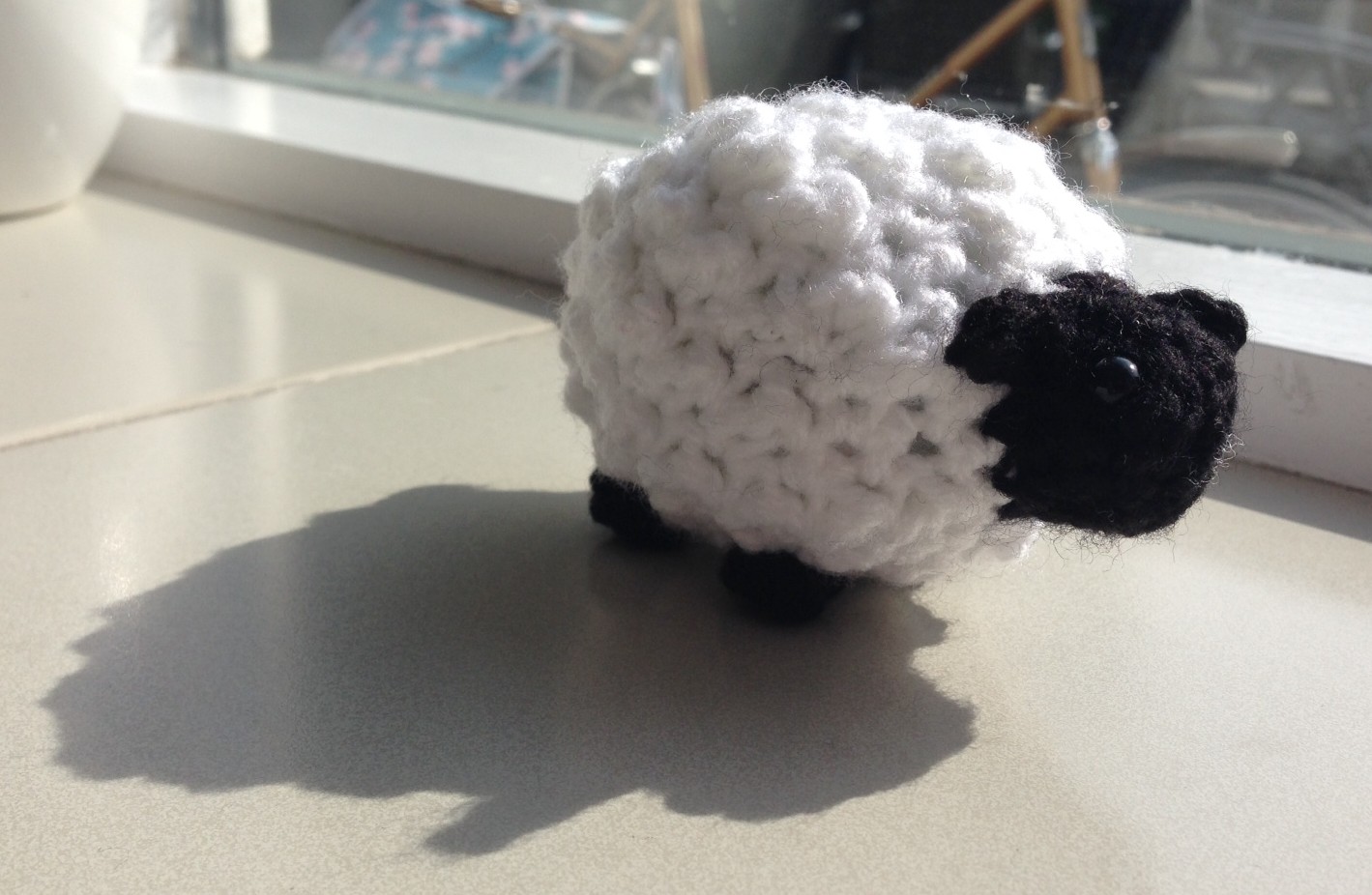 Black doesn’t photograph well so the picture does not do justice to the cuteness of his face. I followed the pattern except for the feet. The pattern calls for stringy little feet but I wanted solid ones. 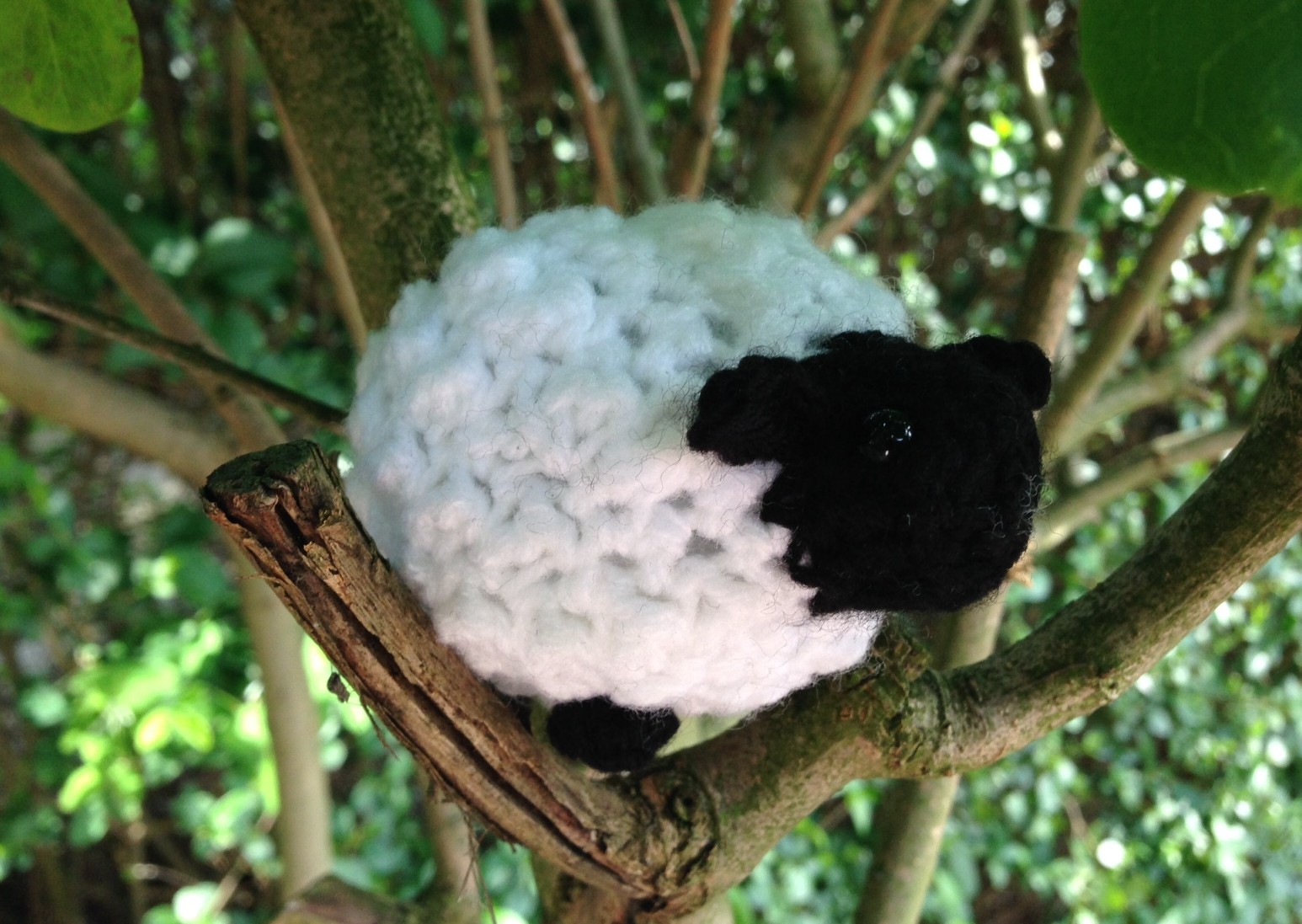 Baaaaaa. Next up, horse or panda. Which is the lesser of two evils? I can’t decide.

The girls made about €80 at the rummage sale today. More importantly, I got a lot of stuff out of my house. Kringloop, the Netherlands’ answer to Goodwill, arrived with a big truck at the end of the sale to pick up all the unsold items, so none of it came back home. The tissue pouches didn’t sell well — people were there for used household items — but they’ll keep until our pre-Christmas craft sales.

It was after 4:00 this afternoon before I got a chance to sit down at my sewing machine to make today’s Thing. I wanted something quick but useful. I didn’t want to just make something for the sake of making something. And what’s more useful than underwear? Not much.

I set a challenge for myself to see how quick I could sew a pair of underwear for Martina, using the same Cheeky Panties pattern from Burdastyle that I’ve used before. 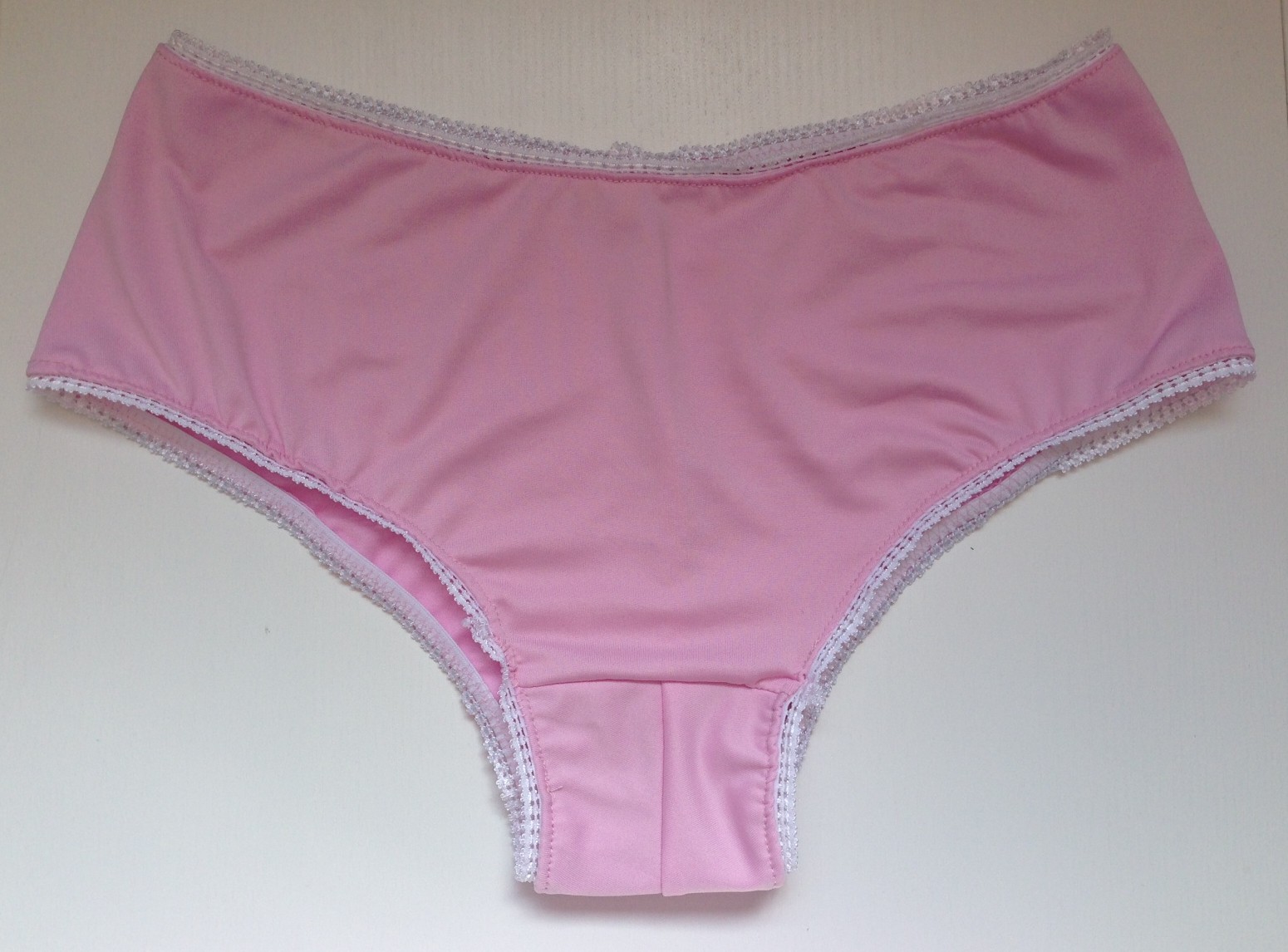 It’s not the neatest pair I’ve made, but it is the fastest. From start to finish I was busy for about 35 minutes. Yeah, baby. I’m an underwear-making machine.

Quick, free and useful. My kind of Thing.

Martina and Esther are saving up for a trip to London. Their list of places to go include the Harry Potter Studios, the Roald Dahl museum and at least two musicals, so they have some serious saving to do.

Towards that goal they have sorted and purged a mountain of stuff to sell tomorrow at a large rummage sale. I offered to make them a few small crafts for them to sell as well.

What small crafts? Do you really need to ask? Really? 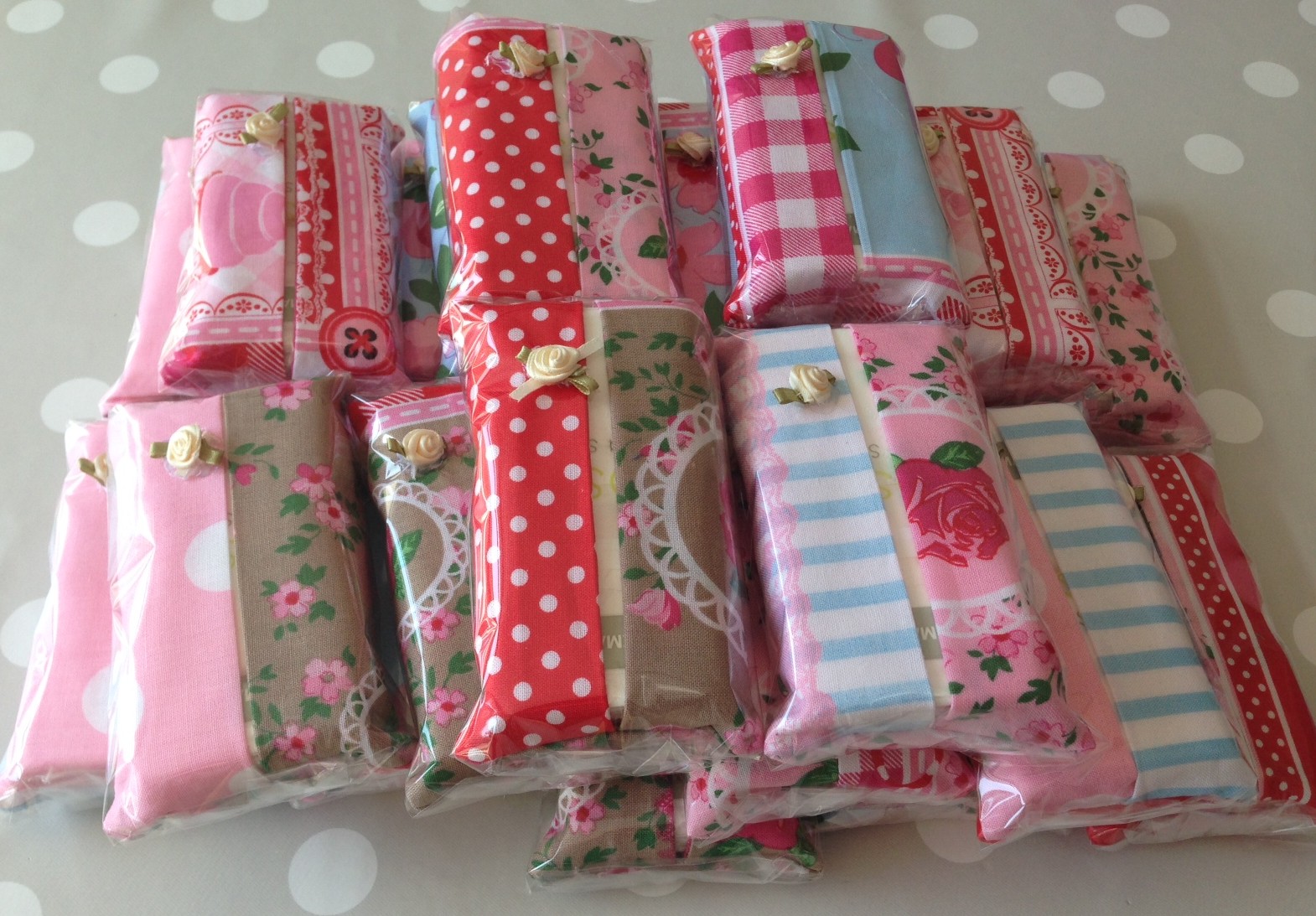 I made this stack of 23 tissue pouches with the leftovers from the Great Tissue Pouchathon. 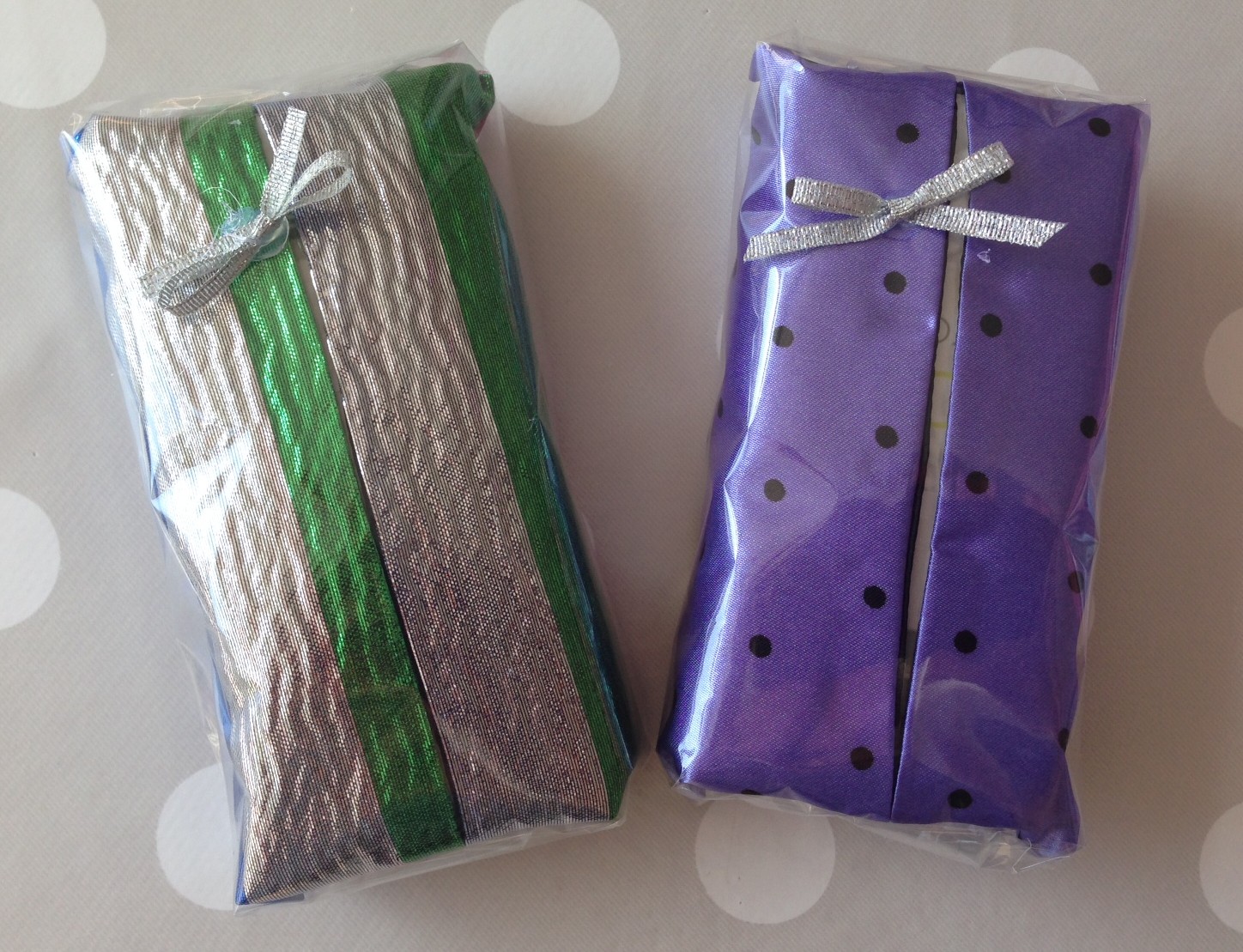 Pouch 24 is made with Esther’s shiny material that I also used for the superhero capes and Pouch 25 is made with leftover lining fabric from Esther’s Minoru jacket.

I wrapped them all in cello wrap and hot glued a little flower or bow on each one. At €2 each I’m hoping these sell well.

Last night was a productive beading session. Cheryl brought me some stuff she’s clearing out, including an old broken necklace with some delightfully mottled glass beads. I pulled out some beading elastic and got to work.

First I sorted by colour and then made one bracelet from each pile of beads. There was exactly enough of most of the colours. The beads are spaced with gold seedbeads. 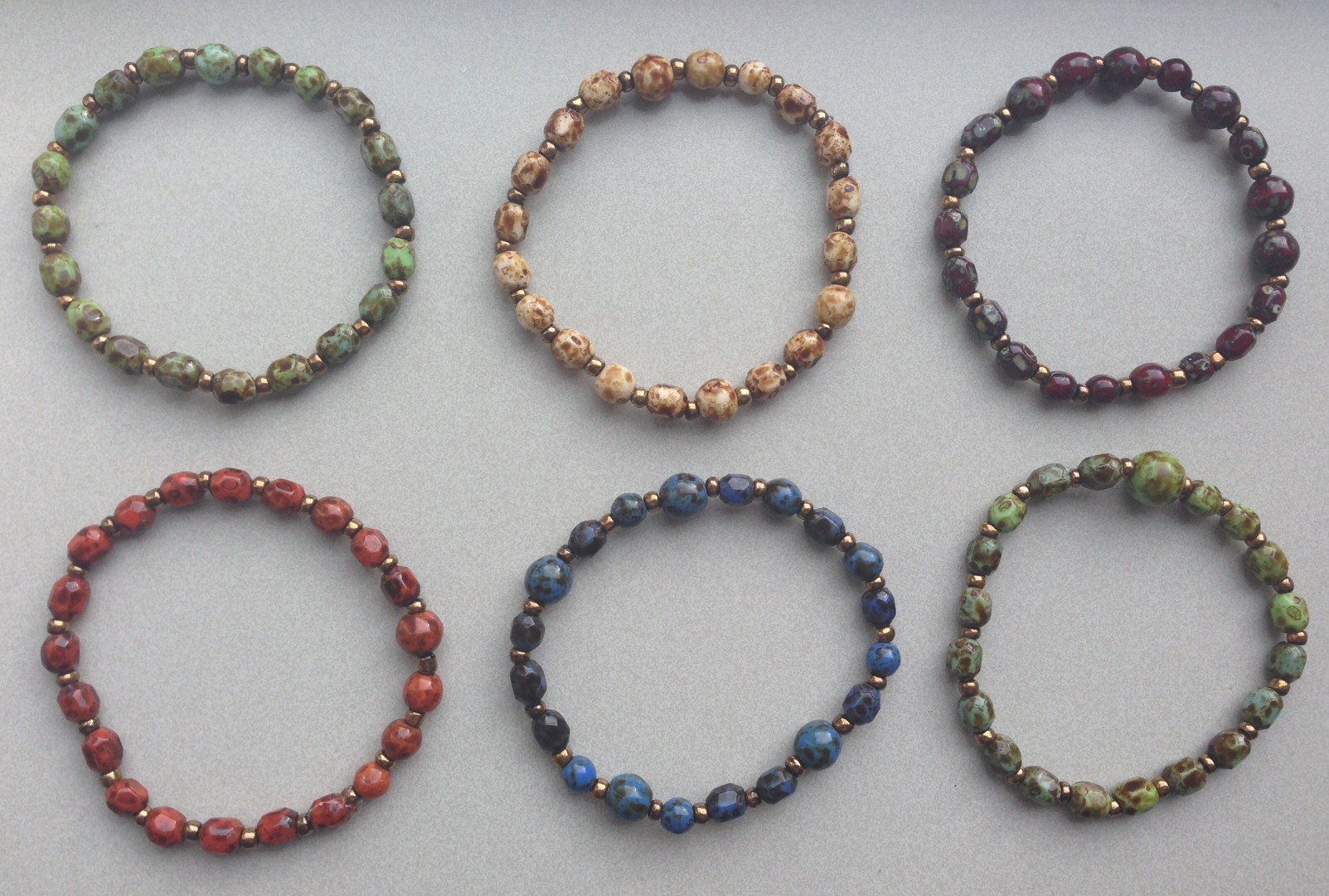 I made two with the green, but realized this morning, when I saw them by daylight, that I could have made two different ones. Both the green bracelets are a mix of bluish-green and green-green beads. I suppose I could pull them apart. Meh.

Since all I contributed to these Things was the elastic it wasn’t even a stash-buster. It did, however, prevent my stash from growing. Also good. 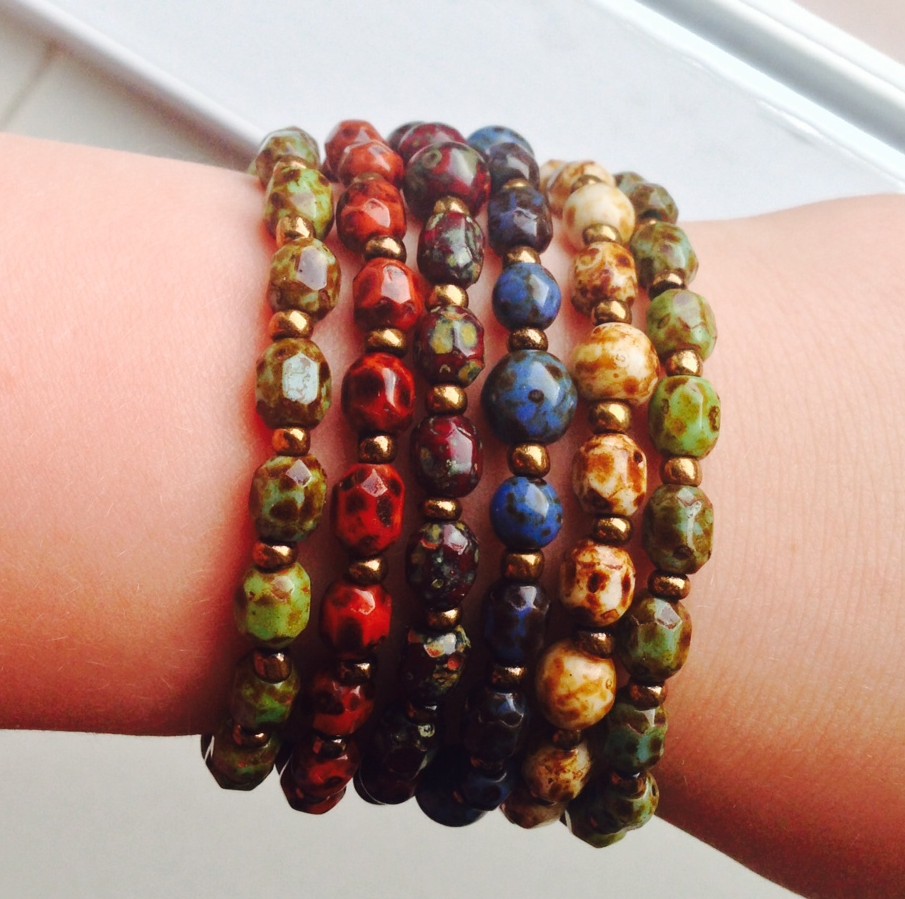 They can be worn individually but the rich jewel tones go well together. I’ll probably gift/sell them as a set.