It’s New Year’s Eve and the night is resounding with a constant barrage of fireworks. It will continue to get louder and crazier until midnight, at which point the Netherlands will sound like a war zone.

For now I’m taking refuge inside, though we’ll join the craziness on the streets later. First I need to finish this blog.

Tonight I wrap up this blog project with a random collection of Things from all three categories: beading, crochet and sewing.

Let’s start with beading. The first piece of jewelry is a three-strand elastic bracelet with an assortment of pink glass beads, finished off with a lock and key charm set. 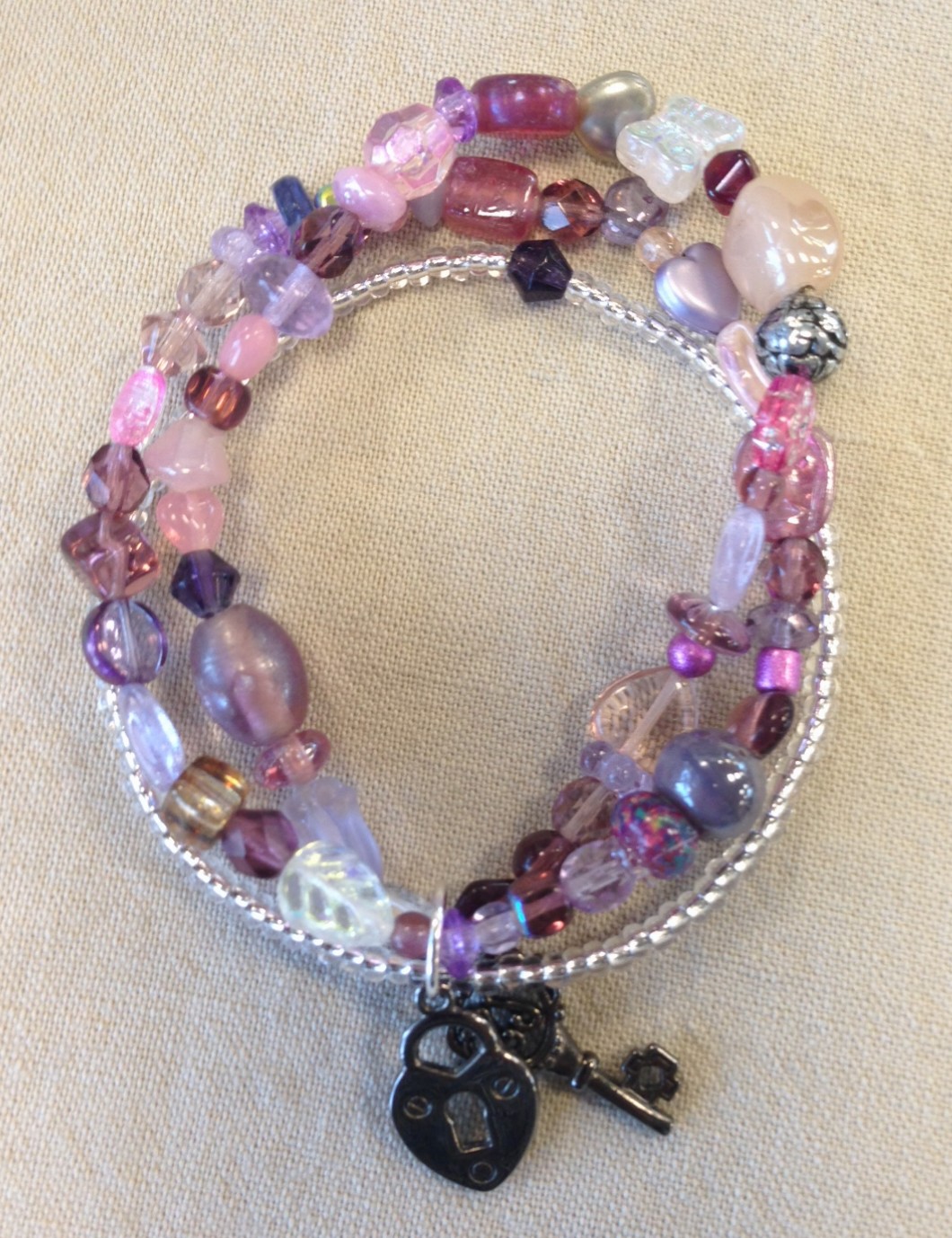 The second is a simple slip-knot necklace, made with white leather cord and a big flower pendant from my stash. 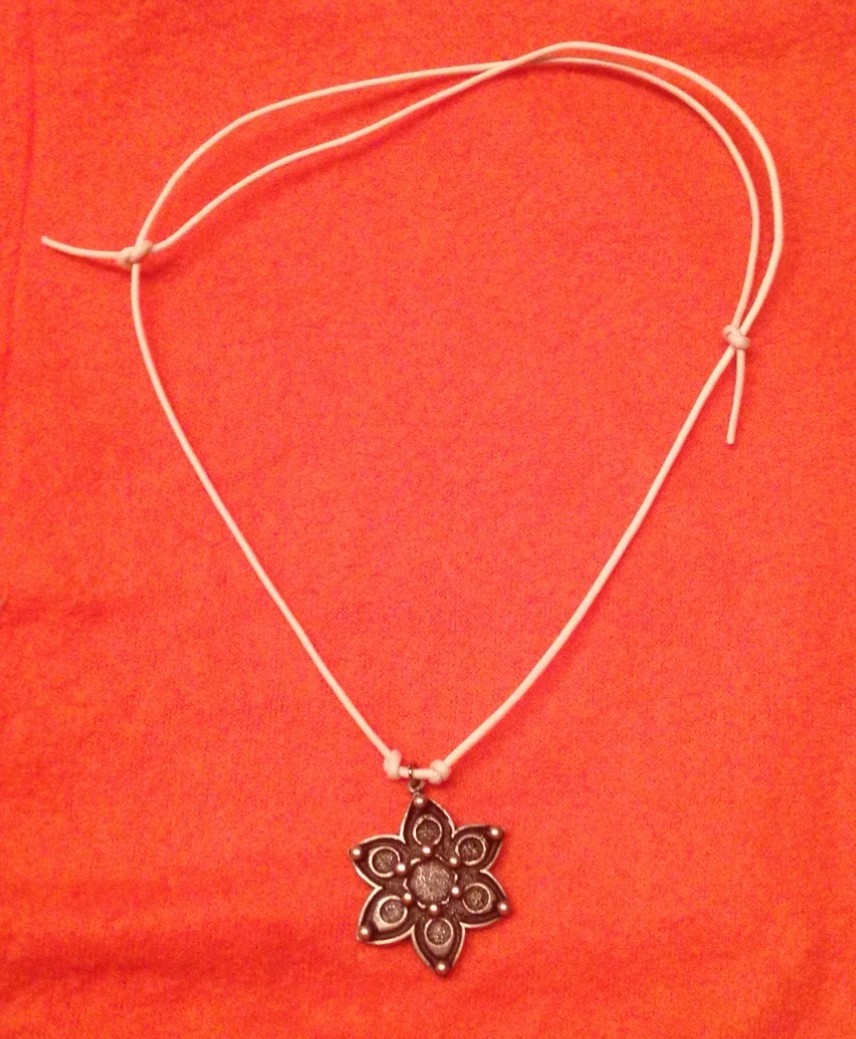 The last piece of jewelry of 2014 is a necklace with some kind of stone (agate?), freshwater pearls and metal seed beads. I made a mistake the first time I made it. Can you spot it? 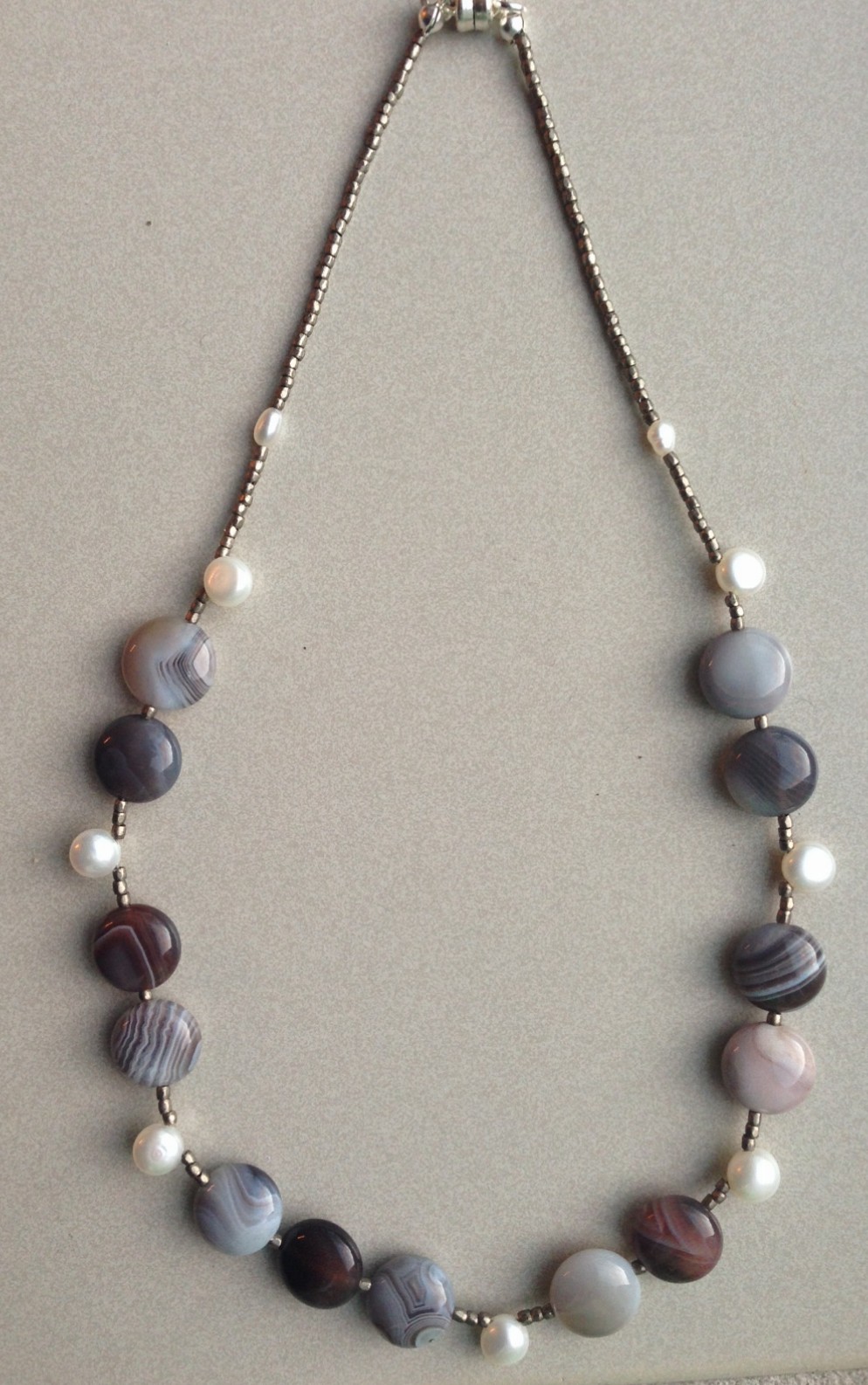 I thought the section with three stone beads was in the middle. This evening I restrung it, removing the extra bead and adding some more seed beads to compensate. 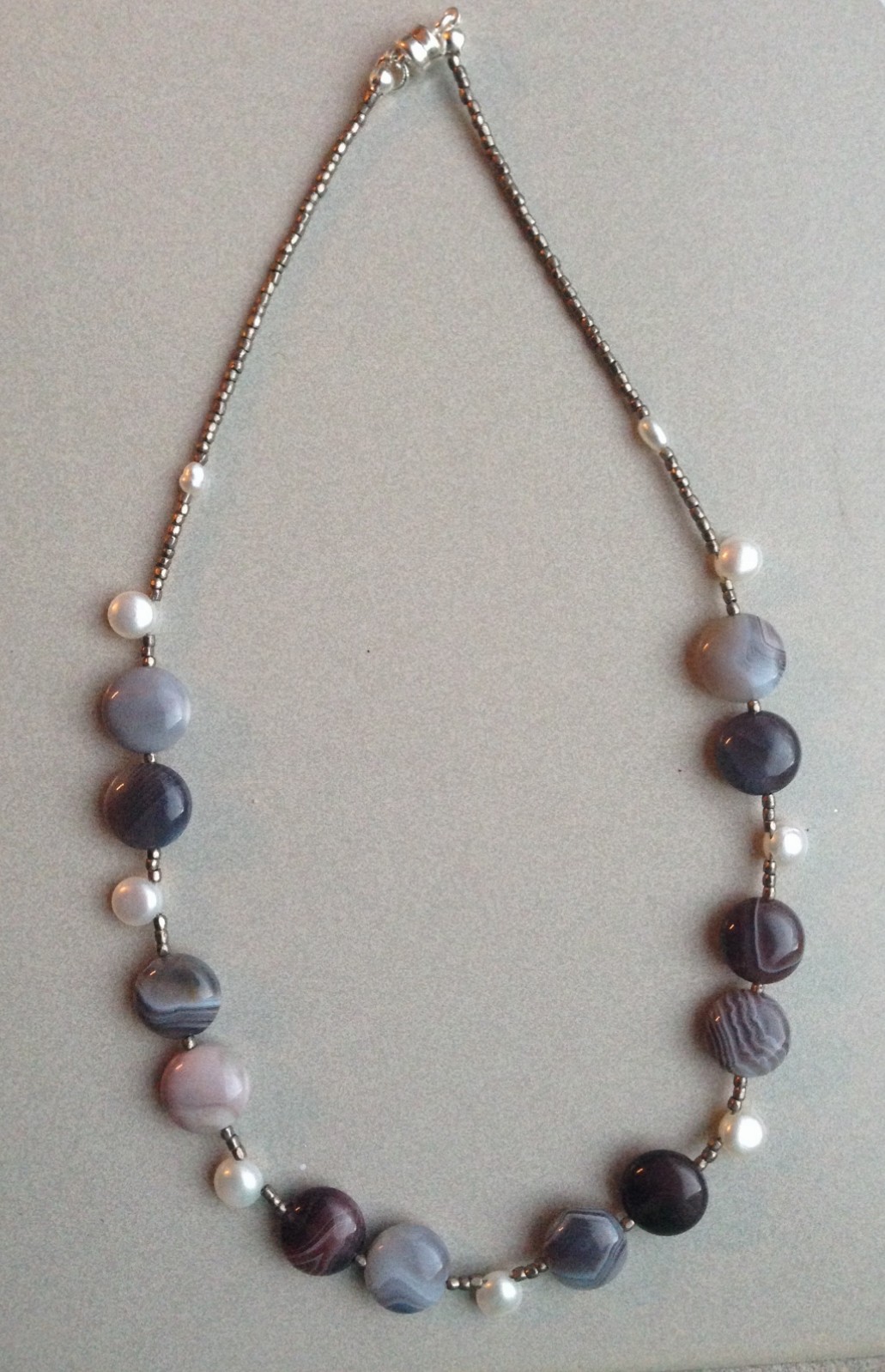 The next category is crochet. This Thing was a gift for a young friend, Rebecca. Earlier this year I made her a yellow toque and scarf with the yarn left over from a blanket from her Oma.

There was still enough left for one more gift. For her birthday, I crocheted a bag to hold her crocheted turtle, Pumpkin, that I made for her last year and that she sleeps with every night. 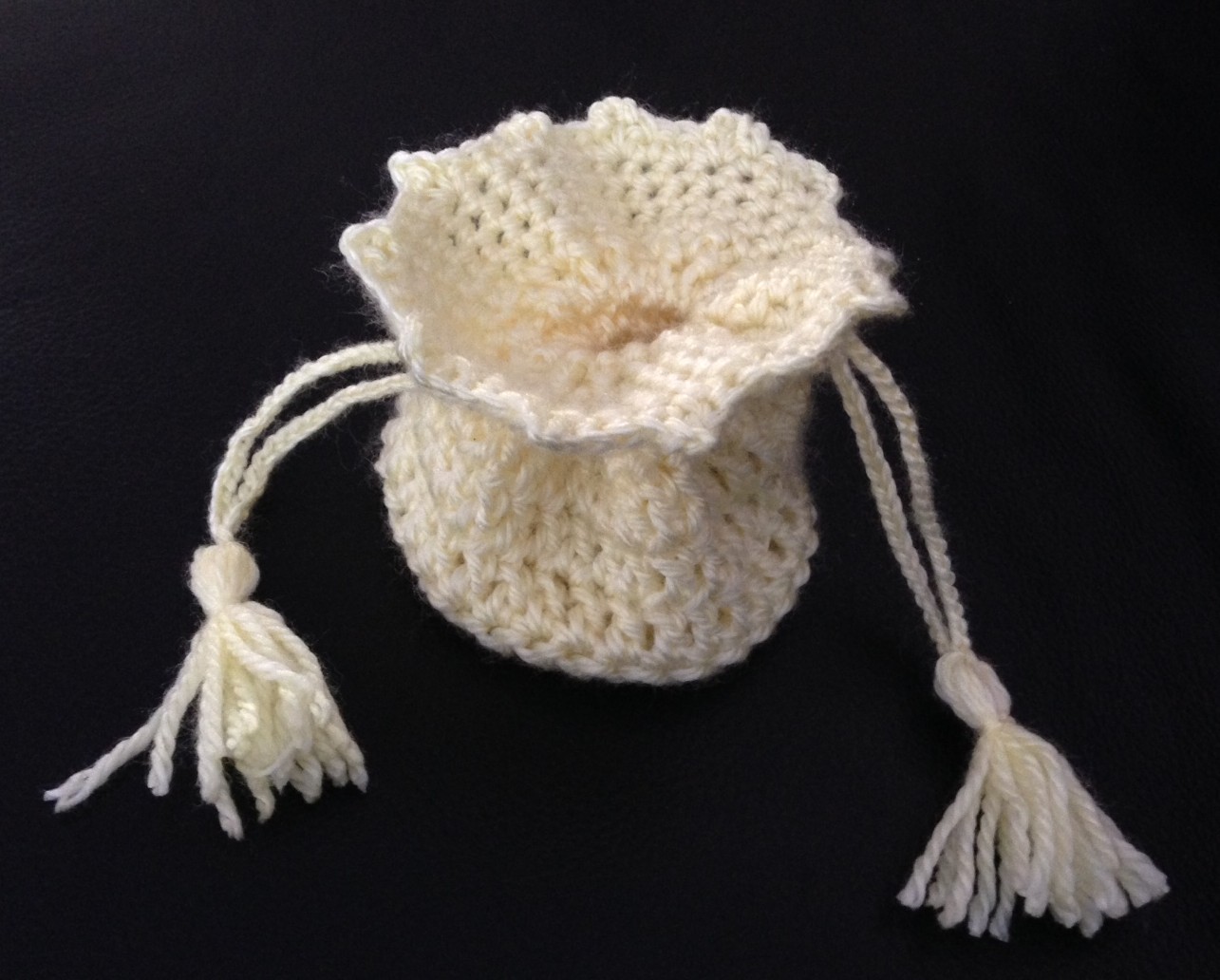 I improvised a pattern and finished it with a drawstring cord with tassels. 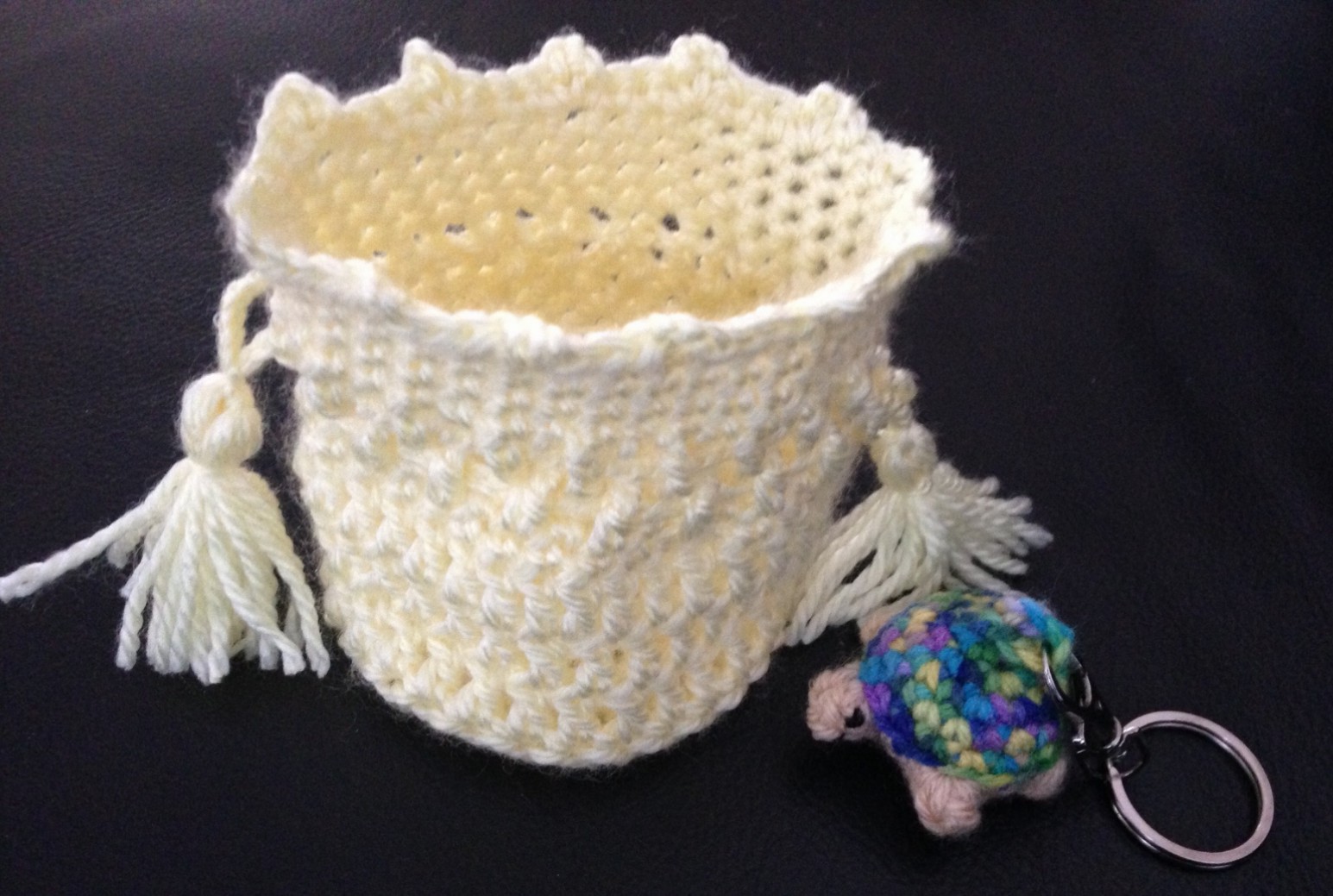 I included another little turtle that I crocheted earlier this year. He can be a little brother for Pumpkin.

The last three Things of 2014 fall in the sewing category.

The first is another bra for Martina. (Sorry, darling. This is the last time I will post your underthings on the internet.) 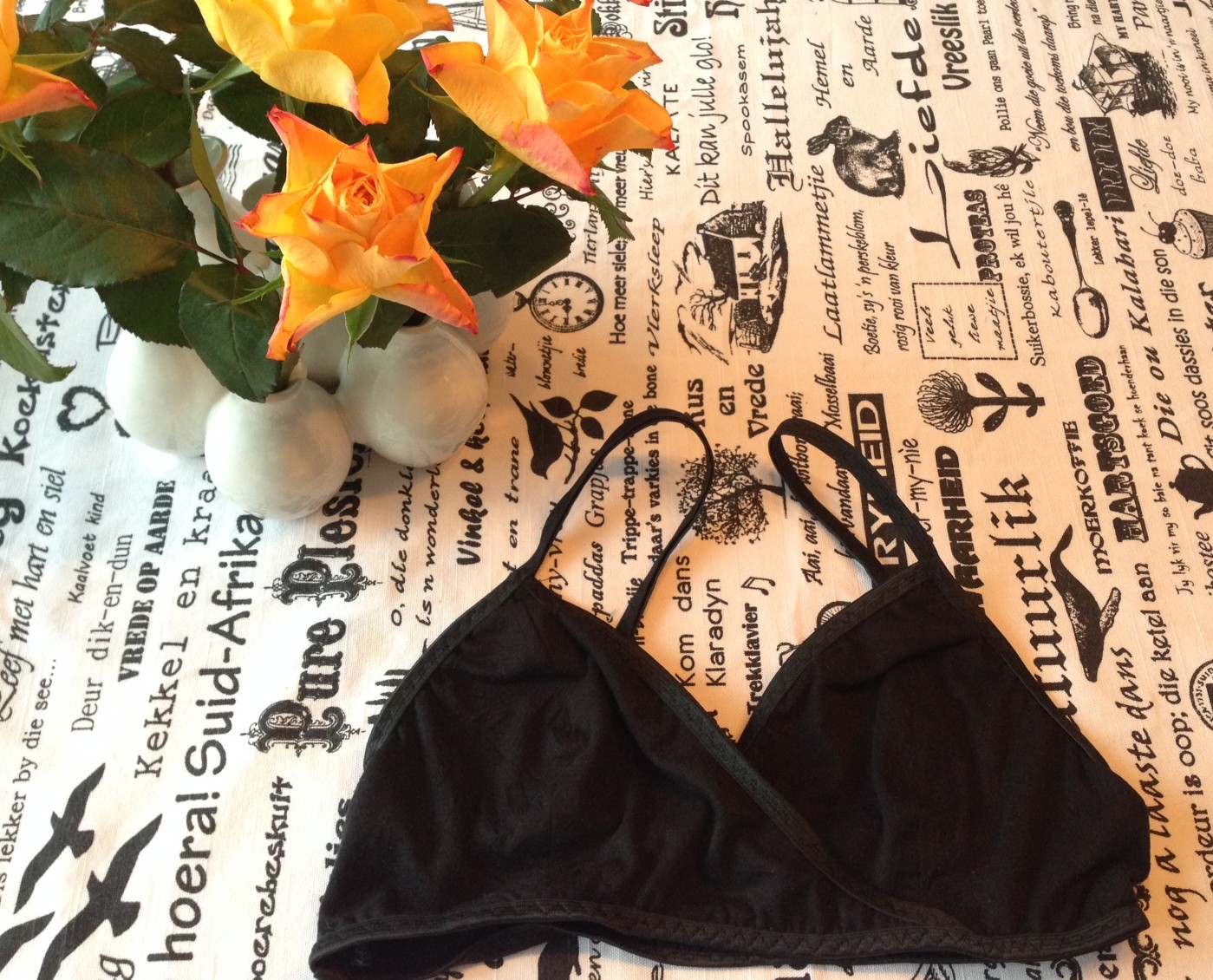 She needed a black one to go under her Christmas gala dress. I used the Ohhh Lulu pattern I’ve been using all year. The fabric is from an old t-shirt of mine (the one that I cut the sleeves off of for Esther’s shirt) and the straps are the wide black elastic left over from that project.

The next item was a gift. Some months ago Esther made a pillow for her dear friend. There’s a 70-year age gap between them but they get on fabulously. He’s from South Africa so Esther used a fabric that I picked up for her when I was there two years ago. This was her pillow. 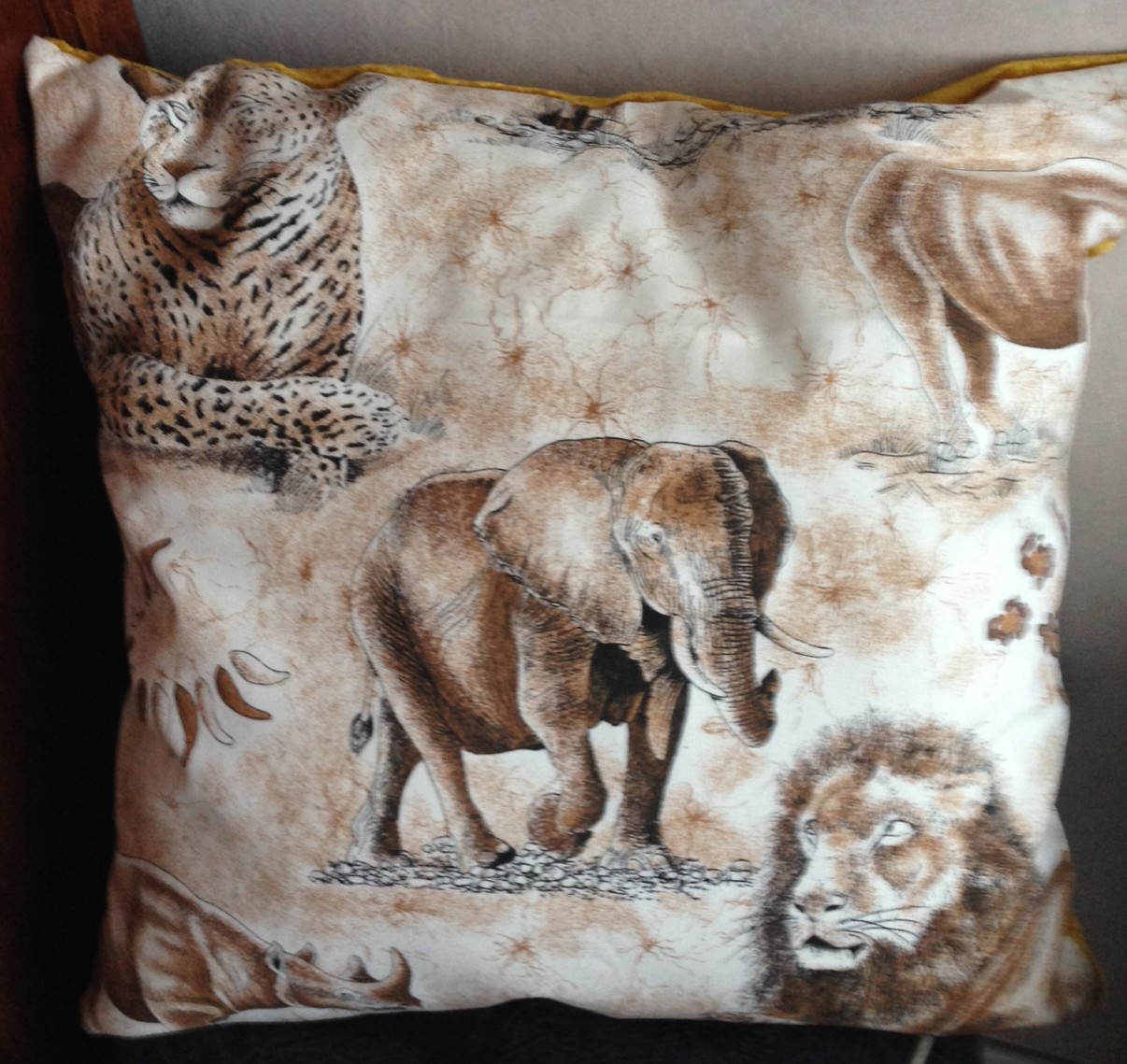 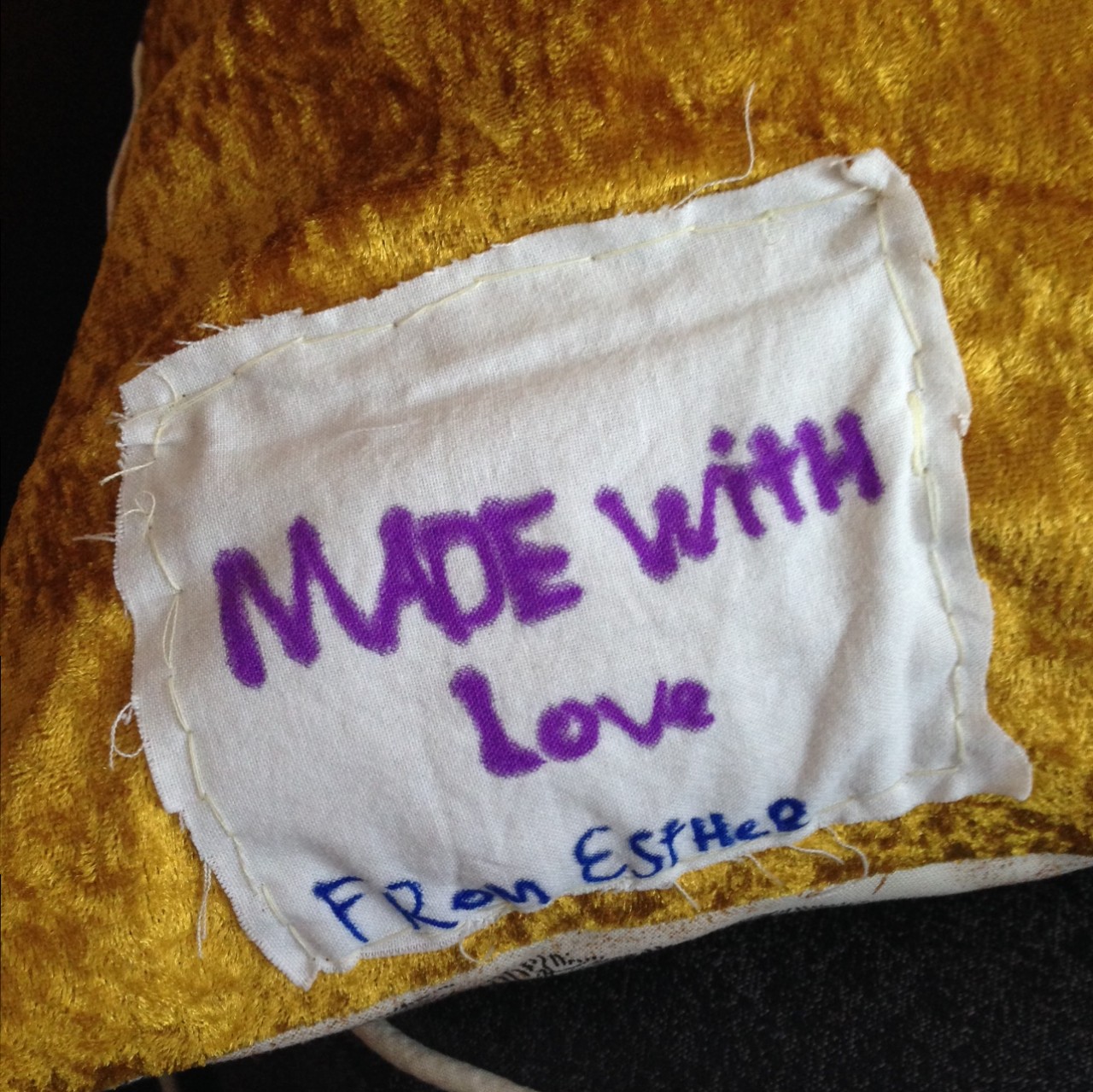 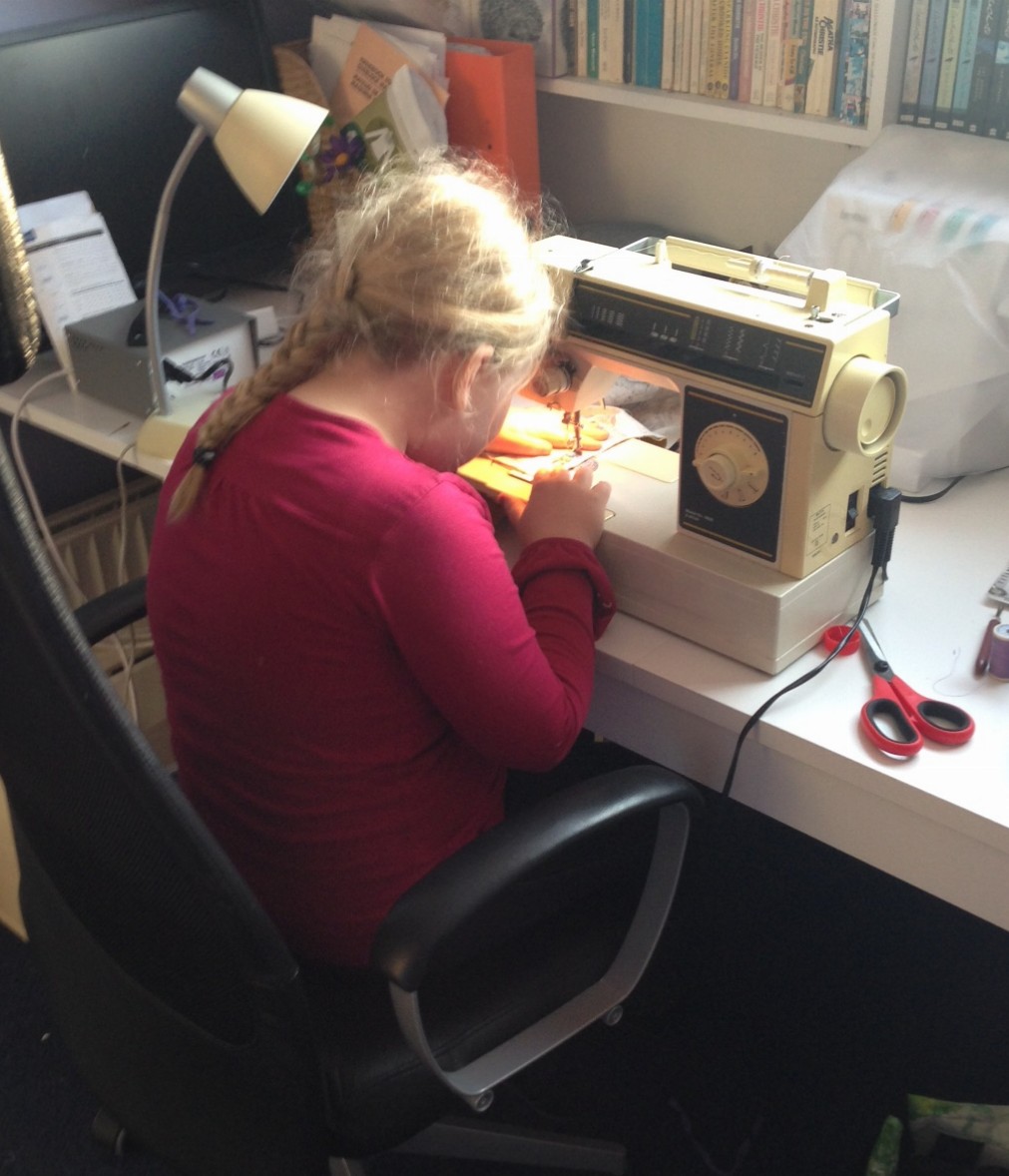 He loved it so much that his wife asked me if we could make another matching one. Last week I made this. 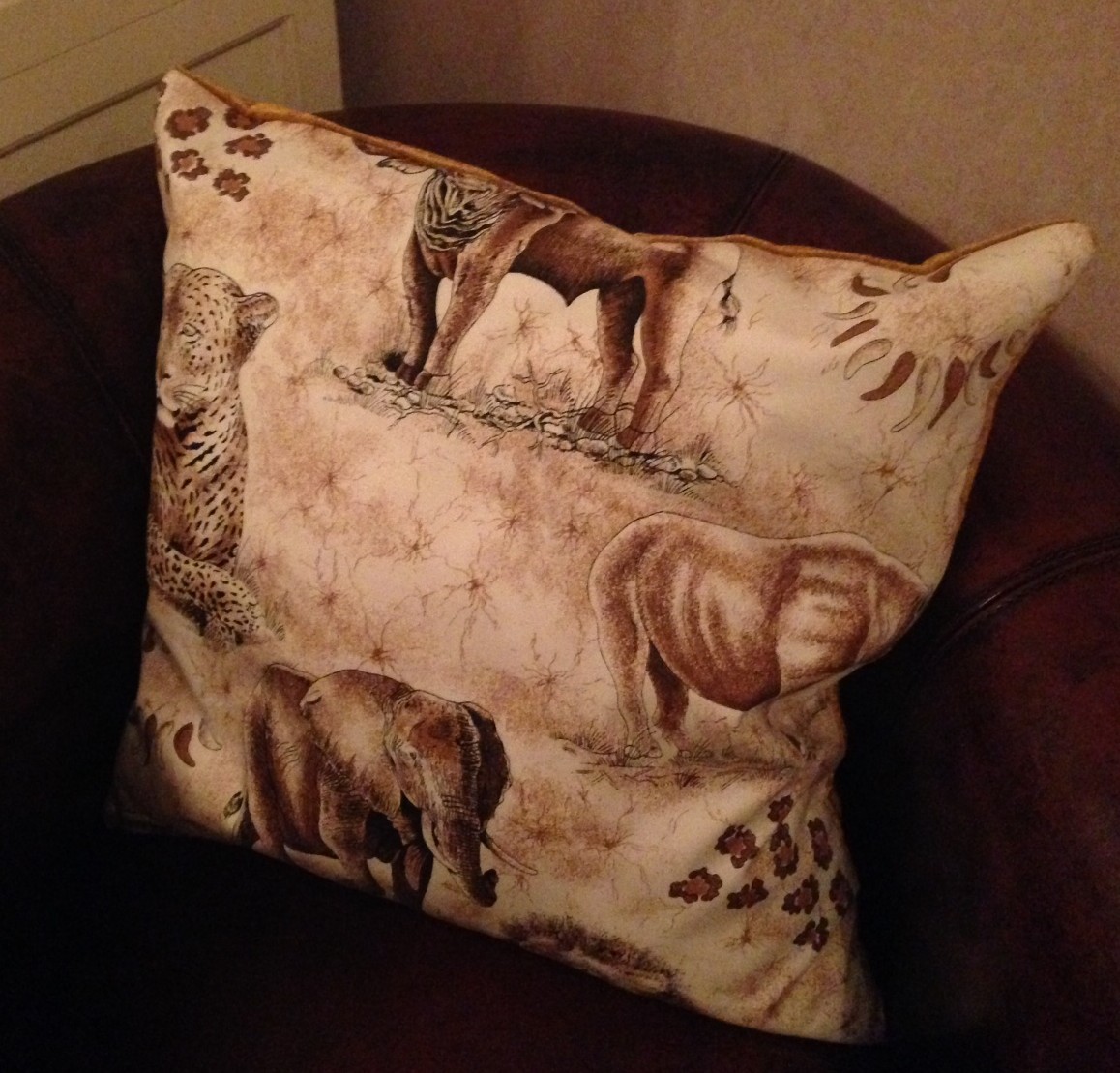 I didn’t position the fabric as well as Esther did, but the pillow was well-received nonetheless and together they make a nice set.

My last project of 2014 was the fulfilment of a promise to Esther made a couple of months ago. She requested a cloak, but I kept telling her I needed to finish a bunch of other projects first (flower girl dresses come to mind.) This past Monday I kept my promise. 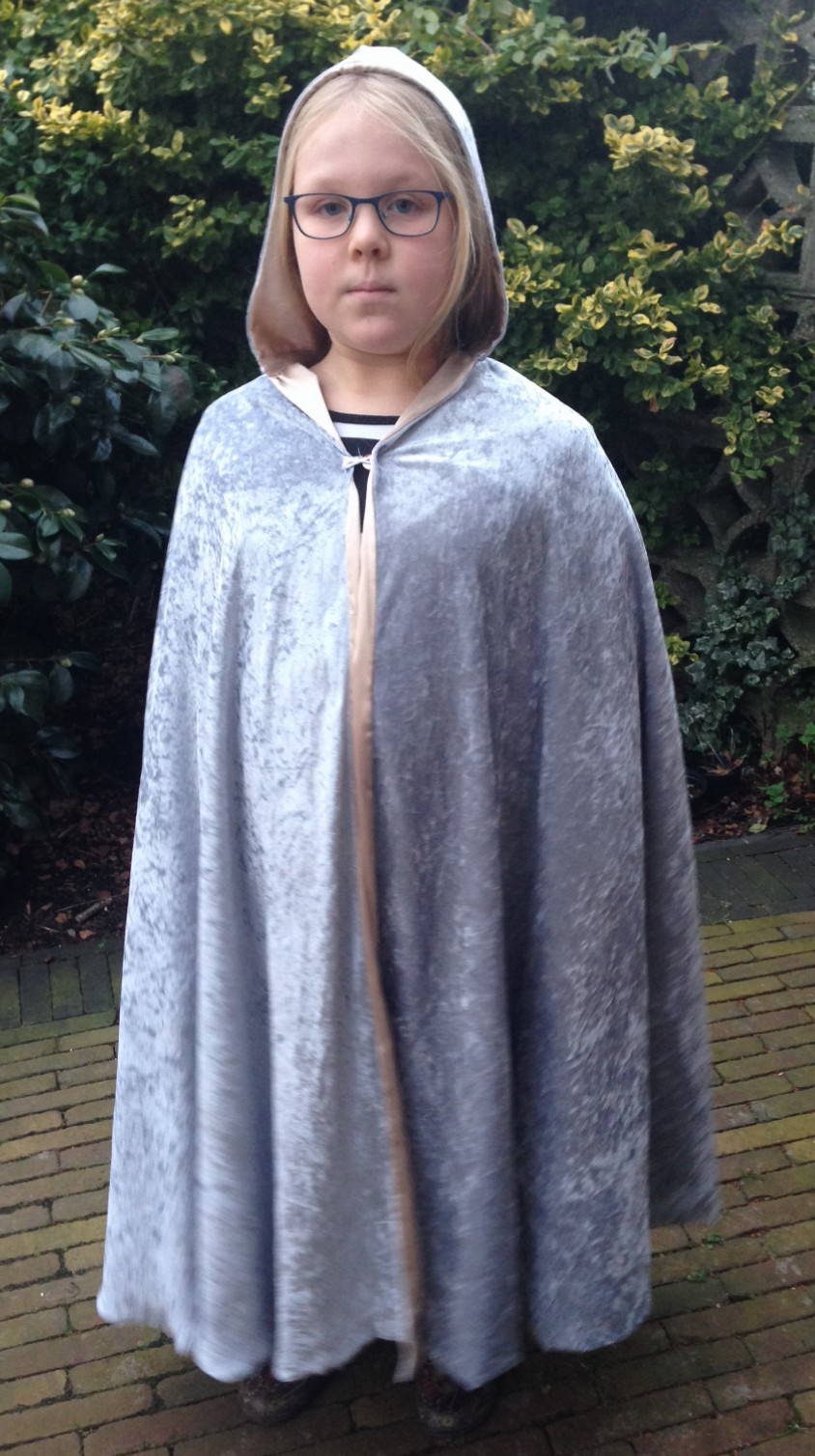 I found instructions for sewing a walking cloak at the Jane Austen website. The fabric is silver stretch velvet from my stash (from the same shopping trip as the white velvet of the angel costumes). 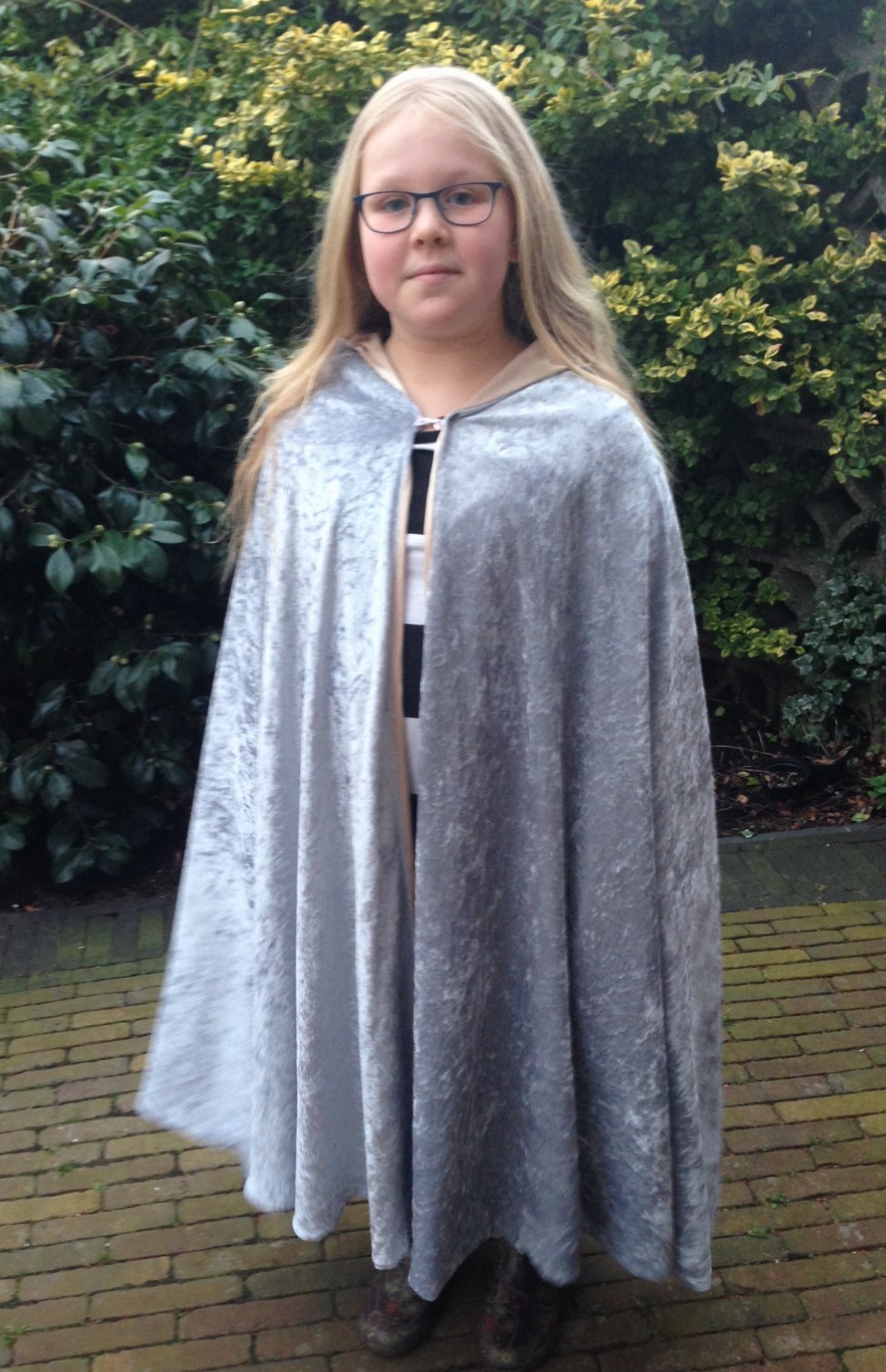 I lined the cloak with the champagne satin from the flower girl dresses. A gold button from Esther’s stash and a white ribbon loop serve as a clasp. 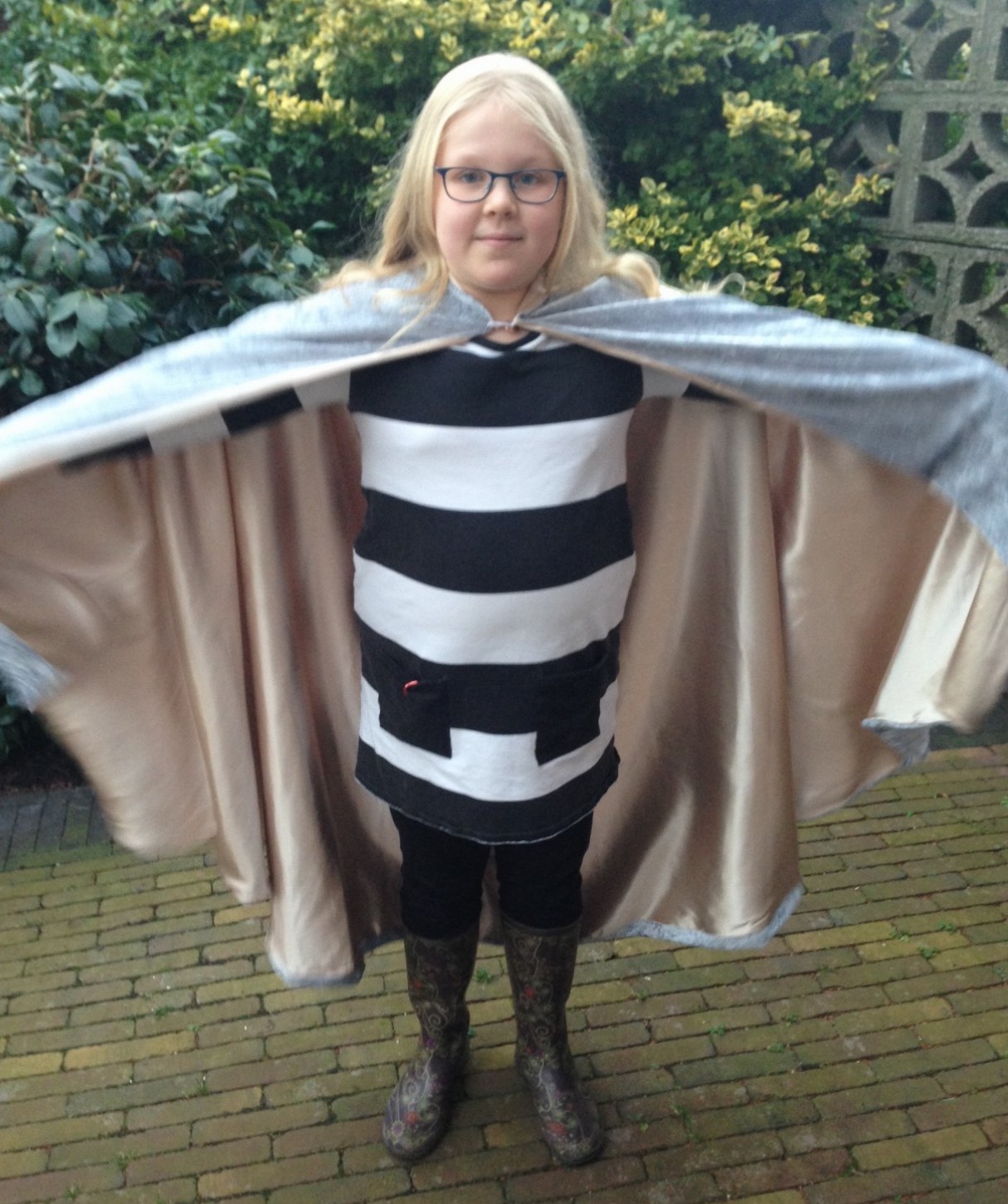 Due to fabric limitations I couldn’t quite make it the length Esther wanted (sweeping the floor like Darth Vader) and the hood is a bit smaller than anticipated, but it’s still delightfully swishy and full. 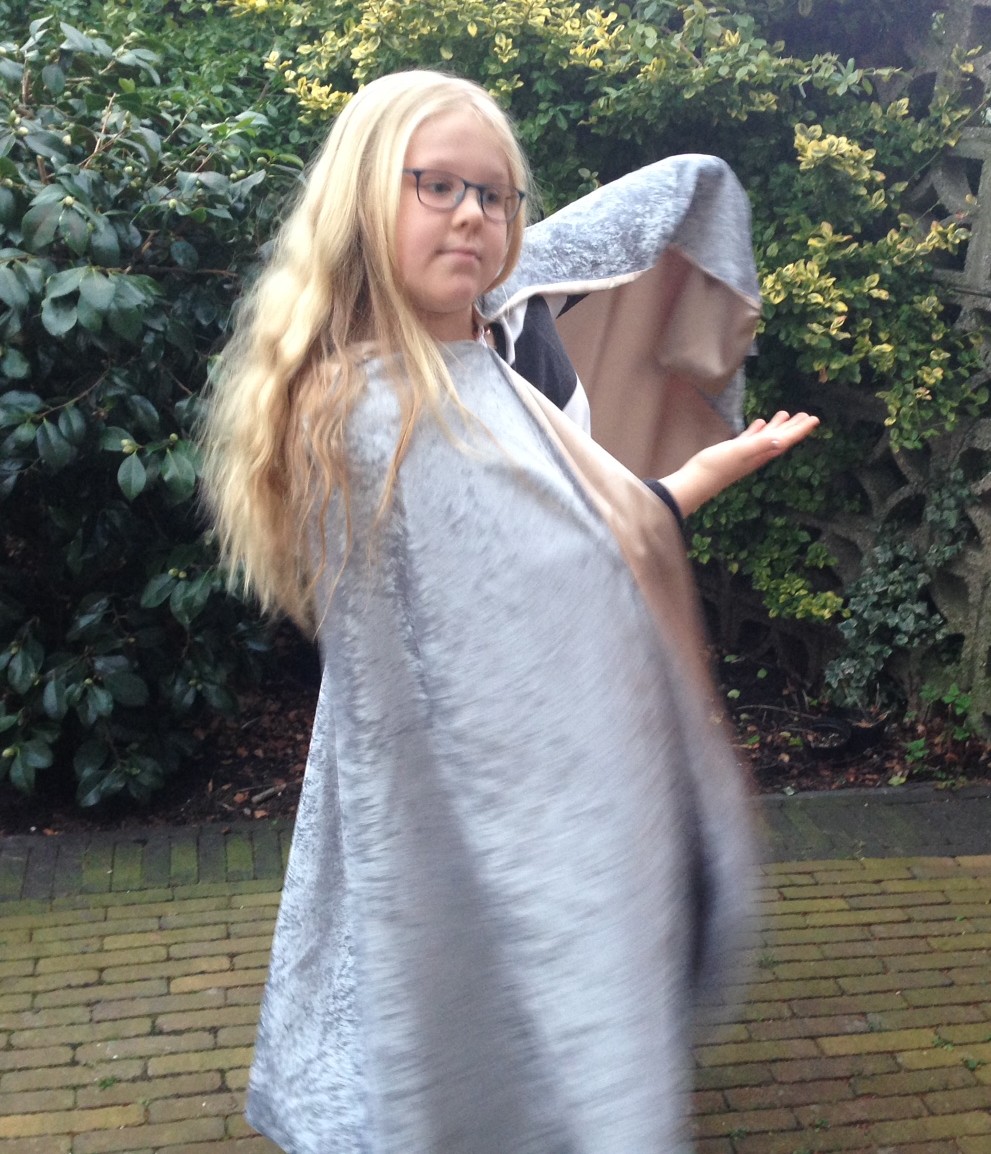 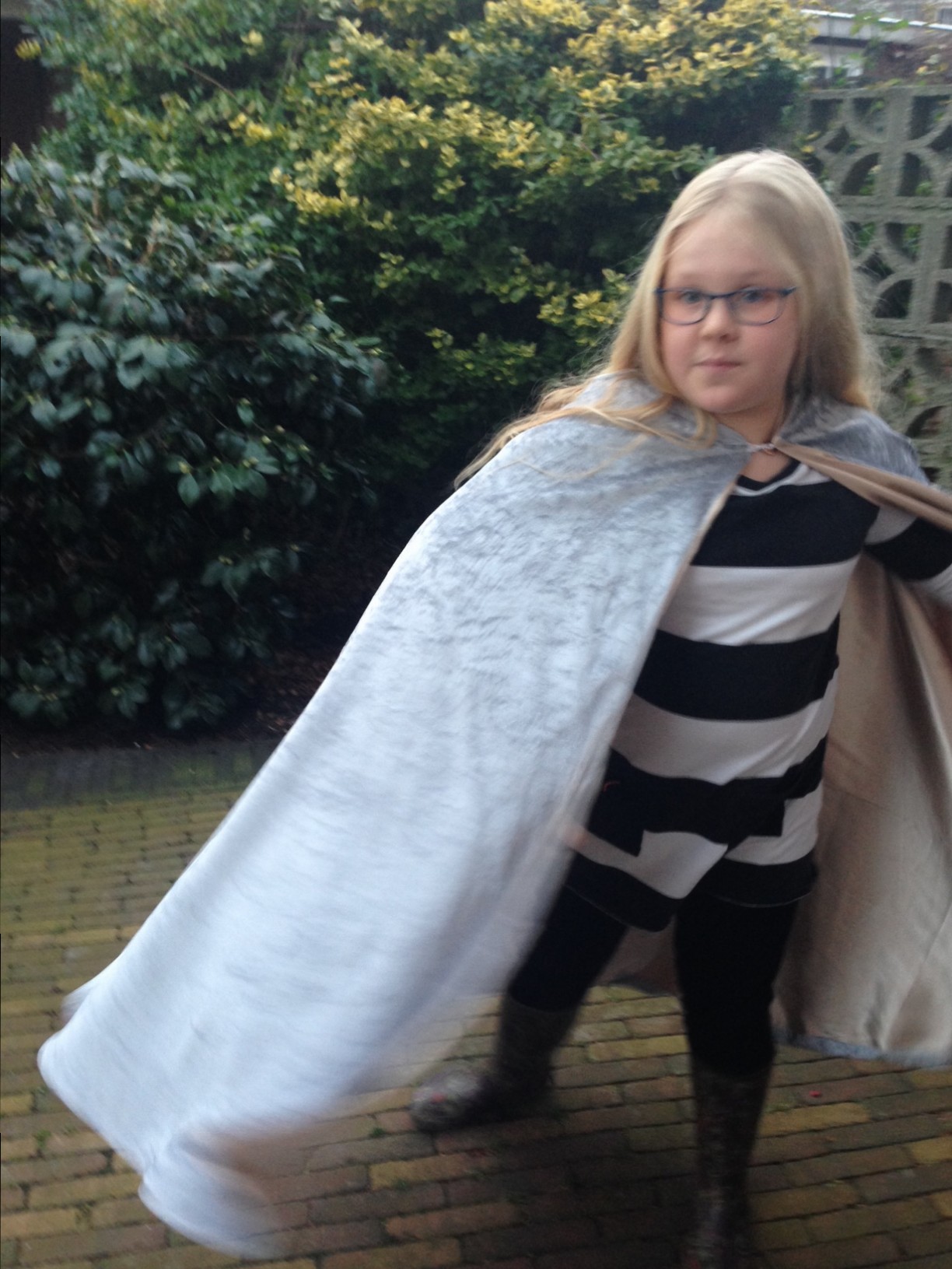 Would you look at that? I have €1.02 to spare. Time to go shopping for craft supplies!